Focus Home Interactive has announced another game set in the Warhammer 40,000 universe, Necromunda: Underhive Wars. The turn-based, tactical RPG pits factions against one another for control of a massive cluster of ruins known as the Underhive.

The game is being developed for PC and consoles by Rogue Factor, who previously worked on Mordheim: City of the Damned.

Focus isn't saying much else about the game for the time being, though it did release the concept art featured above. The publisher is hosting an event in Paris at the beginning of February, and more details are sure to follow. 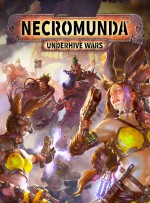