Since the series took its first hiatus back in 2010, the NBA Live has never regained its shooting form. From 2013 to 2015 the development seemed to be moving in the right direction, but the progress wasn't significant enough to challenge the NBA 2K series in any serious way. After taking another year off, EA Sports is finally ready to show us what NBA Live 18 has to offer.

These screenshots and video are our first look at EA's latest attempt to rebuild its NBA brand. Check them out:

The graphical attention to detail is impressive, from the small sweat beads on players foreheads to individual touches. Some of the dribble animations and drives to the hoop look great, but that was the case with the last title as well. The true test comes when we see extended gameplay clips and a look at the wider feature set. Is there more animation variety in the paint? Does the ball still warp to hands? Are any of the game modes built up enough to prove a compelling alternative to NBA 2K? Those are some of the questions the series has to address with this entry.

EA hasn't announced a release date for NBA Live 18 yet, but if the past is any precedent you can expect it to arrive on PlayStation 4 and Xbox One sometime this fall. 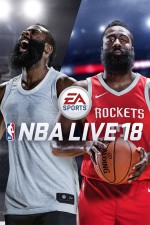