Playing off of the Honey Badger video narration internet meme, the latest NBA Jam: On Fire Edition trailer shows that the game will feature cameos from the world's most fearless animal. The trailer offers more than that though, confirming the price of the game on both Xbox LIVE and the PlayStation Network as well as a huge roster of modes and features that intentionally fly by too fast to be able to see them all.

NBA Jam: On Fire Edition releases on Xbox LIVE on October 5 and the PlayStation Network on October 4. The games will cost 1200 Microsoft points and $12.99 respectively.

If you don't know what the big deal is about the Honey Badger, then click here (warning: the video contains some racy language, as well as snake eating). If you want to know more about On Fire Edition, click here. 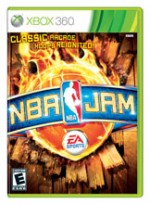