NBA 2K14 came out for PlayStation 3 and Xbox 360 over a month ago, but the next-gen installments feature a few new additions to the popular My Team mode that might make them worth the wait.

My Team is a card-based mode introduced in NBA 2K13 that allows players to build their own fantasy teams. For the next-gen versions of NBA 2K14, My Team sports a new Domination mode, which pits players' custom teams against real NBA teams. Additionally, players have access to single-player and online tournaments, which can net them rare players and collectibles. Visual Concepts has also added Emerald, Sapphire, and Ruby level cards to improve your teams. See the additions for yourself in the gallery below; they might not be the most exciting screens, but they give you an idea of what to expect.

NBA 2K14 will be available on launch day for PS4 (November 15) and Xbox One (November 22). For a rough idea of how the game fares to previous installments, check out Bertz's review of the current-gen versions. 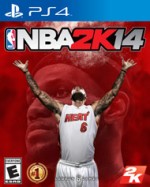