Though many sports games successfully capture the spirit and culture of contemporary sports, few tap the rich vein of sports history. For years Madden featured legendary teams, but stopped short of including the official player names and likenesses. The NHL series celebrated the Montreal Canadiens’ 100-year anniversary with a team of all-time greats like Maurice “Rocket” Richard, but they had no historical rivals to compete with. With Electronic Arts owning the NFL license, 2K Sports mashed up an impressive roster of Hall of Famers in All-Pro Football 2K8, but without the official team licenses this brilliant concept didn’t resonate like it should have.

Visual Concepts finally struck gold with NBA 2K11’s Jordan Challenge, which allowed users to step into the shoes of His Airness in several painstakingly recreated historical matchups that featured authentic rosters, jerseys, and even television broadcast presentation. Both longtime fans and younger hoopsters who never watched Jordan play in his prime celebrated the mode. For NBA 2K12, the development team took it a step further in creating 15 of the most memorably teams in hoops history with the NBA’s Greatest mode. Though most of the most memorable players from the past 60 years of made appearances, including Magic Johnson, Larry Bird, Michael Jordan, and Wilt Chamberlain, one man was noticeably absent from the festivities: Sir Charles Barkley.

The former Philadelphia 76ers and Phoenix Suns hall of fame power forward is no stranger to video games. During the peak of his career he graced the cover of his own game, Barkley Shut Up and Jam!, and appeared in countless other games like Tecmo Super NBA Basketball and NBA Jam. After he traded throwing elbows on the hardcourt for throwing barbs as a basketball analyst for TNT, however, he refused to have anything to do with video games. Though 2K approached him about appearing in its NBA’s Greatest mode last year, they were unable to reach an agreement.

With Team USA announcing its roster for the Olympics earlier this year, barbershops around the nation buzzed with the discussion of whether or not the new team could hold a torch to the original 1992 Dream Team. NBA 2K13 executive producer Jay-Z thought it would be a great idea to let these two juggernauts square off on the virtual court.

"He asked, ‘Did you get the original Dream Team?’ We were like, ‘We have most of the players, but not all of them,’” recalls senior producer Rob Jones. Most of the players were available for the right price, but Barkley was still playing hard to get. Jay-Z wasn’t having it.

"He said, ‘What do you mean not going to have the Dream Team?’ Jones remembers. “We said, ‘We don't feel that it would be useful if you don't have Barkley on it, and Barkley has notoriously not wanted to be in games since he retired.’ He said, ‘That's crap.’"

The rap mogul, Rocawear founder, partial owner of the Brooklyn Nets, and longtime basketball fan demanded Barkley’s phone number. In less than 24 hours, Barkley was on board.

“He talked to our VP Jeff [Thomas], and Jeff comes in and goes to the meeting,” Jones says. “The next day he comes back and we're sitting in a meeting and the phone rings. He says it's Jay and he says, ‘Oh, by the way, Barkley said yes.’ We were like, 'Really? That's all it takes?’… We're stoked about [it].”

Now he needs to get on the phone and throw his weight around with Scottie Pippen, the lone player missing from the Dream Team. Pippen is a mysterious exclusion considering he appeared in each of the past two editions of the game. So why is he not in NBA 2K13? 2K Sports is being vague.

"There's no doubt in our minds that Scottie Pippen was a key part of the gold-medal winning 1992 squad," says 2K Sports vice president of marketing Jason Argent. "We continue to have a very positive relationship with Scottie, but were unable to include him in-game this year for a variety of reasons, though we share everyone's hope that he may one day appear in our game."

As one of the best defensive small forwards of all time, the Dream Team would certainly get him on the floor to man up against Kevin Durant. As for now, I guess an aged Larry Bird with a bad back and the undersized sharp shooter Chris Mullin will handle the daunting task. I'm sure that will end well... 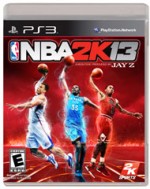