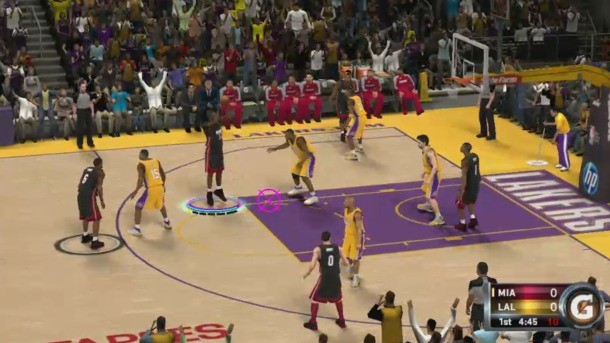 With EA's hoops game on the bench Visual Concepts may not have any competition in the basketball sim genre this year, but the development studio is determined to keep pushing the envelope on its award-winning franchise nonetheless.

In fact, the team says they are ahead of schedule this year, with the new game featuring a host of gameplay enhancements already running at smooth 60 frames per second. "We can't play NBA 2K11 anymore," says gameplay producer Rob Jones.

2K Sports is keeping most of the details about NBA 2K12 close to the vest for the time being, but the demo featuring the Dallas Mavericks and Miami Heat NBA finals showdown did offer a glimpse of the team's renewed focus on making the final series of the season feel like a special moment. Just like with NBA broadcasts on television, Visual Concepts has created unique presentation packages that speak to the magnitude of the occasion. A montage of highlights featuring the star players kicks off the Game Four introduction, and player introductions break down each positional matchup with full 3D player models. The court feels like a playoff game, with the Dallas crown in full blue-out mode and cheerleaders rallying the fan base for the tip off. The commentators step up their game as well. During pre-game analysis they discussed the series history and broke down the keys to the game at hand.

On the court, the most noticeable new features are the fluid animations and the level of facial detail on the players. 2K rebuilt the logic system that strings together animations dynamically, which the team says should make the animations line up more with what users expect to see when they are dribbling, passing, and shooting. The reworked facial expressions, skin, and lighting give the players a sense of emotion. The best part about the re-skin is that it's much easier to tell players apart with the traditional gameplay camera.

The only gameplay details I could squeeze from Jones are vague. He says the team is fine-tuning the responsiveness of the defensive control, as well as beefing up the AI offensive logic. Instead of simply dribbling up the court and passing the ball around the perimeter until it can exploit a defensive lapse, the AI is more responsive to developments on the court. It can re-evaluate the situation as the shot clock ticks away, and use some of the more advanced dribbling moves you normally don't see them pull out of the bag of tricks.

Jones wouldn't budge on sharing the team's plans for game mode improvements other than to say that the team recognizes that the online and My Player experiences need work. When I asked about the return of a historical mode like the Jordan Challenge, Jones smiled and said they almost always incorporate NBA history into their games. Look for more intel on NBA 2K12 later this summer.