Last year's NASCAR Heat Evolution was Monster Games' first current-gen NASCAR title, and its return to the sport. The game had its high points, but was overall a pretty basic experience. NASCAR Heat 2 (out September 12 on PS4, Xbox One, and PC) is a more ambitious project, encompassing new features across the board.

Here's a list at some of just some of the things to expect from the title – with more to come this summer.

This is just the beginning for the title, so stay tuned for more details. Looks like Mid-Ohio road course in the Xfinity series is in the game (above), as well as the dirt track at Eldora for the trucks (below). 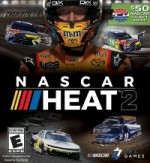