It's refreshing to see this much care given to a property I have no attachment to; all licensed games deserve to be treated like this. Ubisoft Montreal has clearly put in some effort into creating this game, which is a unique blend of rich one-on-one fighting and adventure elements in a larger RPG structure. Unlike last year's Naruto title, this time we get to play as Naruto and several of his friends, one of whom begins a journey down a darker path. The story (which covers episodes 81-135 of the anime) feels a little disjointed but also has some compelling moments. I just wish the missions had more variety, because many of them boil down to simple fetch quests. Otherwise, there isn't much else that bugged me about the game other than Naruto every time he opened his mouth, and that's not Ubisoft's fault (in fact, they were kind enough to include the original Japanese VO). For fans this is a no-brainer, but even those looking for a fighter or RPG with some interesting twists should give this a try. 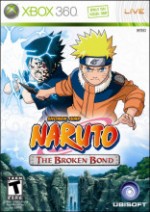