First Details On Murdered: Soul Suspect’s Phantasmagorical Gameplay
by Tim Turi on Jun 07, 2013 at 05:00 AM 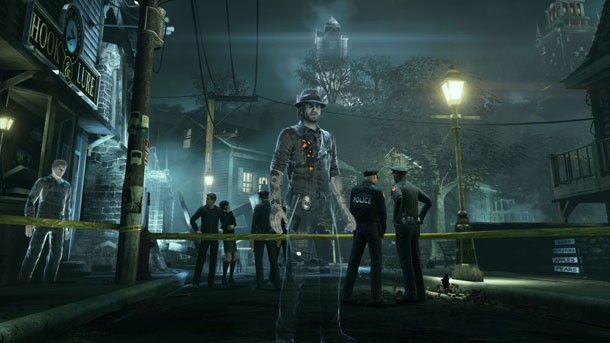 Detective Ronan O’Conner has just been murdered. He knows for sure, because he can see his own corpse on the ground in front of him. He was shot and pushed out a window by a cloaked figure. The killer now walks up to O’Conner’s body on the street, pumps a few more rounds into it, and then walks straight through the now-ethereal detective. This dramatic death takes place at the beginning of Murdered: Soul Suspect, a new game from Square Enix and Airtight Games, the developer of Quantum Conundrum. Airtight showed us a live gameplay demo where O’Conner eavesdrops, possesses witnesses, and phases through walls in an attempt to solve his own murder.

Fellow officers arrive on the scene. One grabs O’Conner’s hat off his corpse, puts it on, and calls him “one dumb son of a b*tch.” The lieutenant slugs the guy for his disrespect. He turns to O’Conner’s body and vows to get to the bottom of this.

The investigation plays out like a mixture of Heavy Rain’s third-person crime scene gameplay and Ghost Trick: Phantom Detective’s poltergeist mechanics. Exploring the scene, O’Conner investigates several points of interest. He eavesdrops on whispering cops who share respectful memories of the deceased detective. A cop stares at his notepad, which O’Conner possesses to read his findings. A hysterical woman rants incoherently to a questioning officer. O’Conner leaps into her mind, where he hears her thoughts unsullied my emotion. O’Conner also investigates the crime scene by examining spectral words floating in the air, like “murder” or “shot.” Checking out these phrases causes him to think about the crime aloud.

O’Conner eventually sees all there is to see around his dead body. The investigation moves into the apartment building he was thrown from. His ghostly form allows him to phase through walls and furniture as he explores. He discovers the ghost of a young girl lurking in the boiler room. Interacting with her initiates a sidequest where O’Conner hunts for clues leading to the murderers still living in the building.

On his way to the top floor, O’Conner is confronted by a menacing, dark demon that wants to consume his soul. The game suddenly shifts from moderately paced investigation to intense cat and mouse chase with a malicious spirit. The creature can obliterate him head on, so O’Conner has to be sneaky. The Airtight dev flees and then attempts to get the drop on the demon, flowing through obstacles as he stalks its silhouette, which can be seen through walls. After several fruitless attempts, O’Conner possesses a cop nearby the demon. He waits for the inter-dimensional demon to pass over the cop, and then O’Conner leaps into the evil thing and destroys it from the inside.

The deceased detective eventually reaches the upstairs crime scene. O’Conner searches the area and discovers a broken metal baseball bat, his old gun, police tape from the window he was pushed from, and something called memory residue. Trying to pick up his old sidearm with his ghostly fingers is fruitless. The memory residue is more useful. Interacting with it grants him a flashback where he attempts to counter his killer with the bat, which breaks over its head without a flinch. The other memory residue exposes a girl who witnessed O’Conner’s murder. The vision also reveals she’s boarding in a nearby church. O’Conner pieces everything together and the girl emerges as the only lead. The presentation ends here, with O’Conner presumably pursuing her for more information.

Murdered: Soul Suspect’s intricate story and unique gameplay make a good first impression. The mix of supernatural crime scene investigation and intense demon encounters is an exciting prospect for gamers hungry for something different without forking over the cash for next-generation consoles. The premise is ambitious, but we think the creative minds at Airtight are up to the challenge. The game is set for PS3, 360, and PC next year. 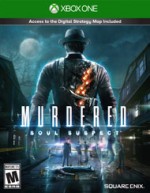