Get Over Here And Play Mortal Kombat X Mobile Today Mortal Kombat X is out next week, but you can get your fix sooner. Sort of. The mobile version of NetherRealm’s latest fighter is arriving in the App Store for iOS devices today.

If you played the Injustice: Gods Among Us mobile title or the more recent WWE Immortals, you have an idea of what to expect here. The fighting action is handled via swipes and taps, with different versions of the characters available to choose from.

The mobile version of the gory fighter includes 24 fighters, upgradeable gear, and unlockable fatalities. In addition to single player matches, the game features multiplayer and a feature to bring a friend's character into your game for an assist.

Mortal Kombat X for iOS will connect with the console and PC versions to unlock content (though what exactly this means isn't specified). You'll also be able to use the mobile version in the persistent Faction Wars.

For more on Mortal Kombat X, check out the launch trailer. You can also read up in our recent hands-on impressions of the story mode. 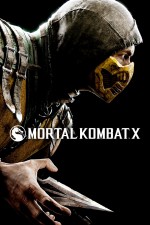