Mortal Kombat’s season pass went live today, granting fans all four of the fighter’s DLC characters. Kenshi, Rain, and an unannounced character will be arriving later on in the summer, but the first offering is Skarlet (available today). Starting as a color palette glitch in Mortal Kombat II, this marks her first appearance as an official, playable character. We got a chance to spend some time with her today, and she’s definitely worth checking out.

Her appearance is essentially a red version of Kitana/Mileena/Jade, but her moveset is unique. Armed with several daggers, she can use them to set up air juggles or toss them as projectiles. These daggers can be thrown in mid-air, either diagonally towards the ground or straight ahead (striking any airborne opponents).

I’ve always been partial to characters with a teleport move, so I’m a fan of her Blood Drop ability. She disappears in a splash of blood, then flies down towards her opponent’s back with a slash. If you use the enhanced version of this move, she’ll mount her foe and dig the daggers into their shoulder blades until they fall.

Blood Ball is a unique move that involves Skarlet stabbing herself in the stomach and throwing a ball of her own blood. This move injures Skarlet, but it can inflict significant damage if it connects. During the stab animation, you can hold up or down to influence which direction it travels.

Her Red Dash move is useless when performed on its own, but can be followed up with a dagger slash or the Red Slide. The latter sees Skarlet slide on a pool of blood, similar to Sub Zero’s traditional ice slide.

Like all fighters in Mortal Kombat, she comes equipped with a devastating X-Ray attack. It begins with an upward palm strike to the nose, and then she follows up by kicking the heel of her shoe directly through her dazed opponent’s eye socket. You’d think we’d be desensitized to these attacks by now, but hers still managed to make us cringe.

Skarlet has access to two fatalities - Blood Bath and Make it Rain. The former sees her stabbing one dagger into her opponent’s ear while slashing their throat with the other. As copious amounts of blood pours out of the gaping hole, she sticks her face into the flow and bathes in it. Make it Rain starts with Skarlet disappearing into the ground, followed by giant blood pillars lifting her opponent in the air. She reappears underneath the opponent and slashes their stomach open, bathing in the blood and organ parts that rain down from above.

This first slice of DLC makes me very optimistic about future characters. Skarlet fits right in with the rest of the roster, and her entertaining moveset and fatalities are amongst my favorites. Featuring her own ending, she seems like a full character rather than an afterthought or palette switch. If this is the level of quality we can expect for with the rest of the DLC characters, consider me onboard.

Watch below to see Reiner and myself give Skarlet a test drive. 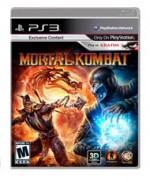