The Monster Hunter series has always had a dedicated fanbase that just can't get enough of slaying monsters and upgrading their gear. Monster Hunter: World is the series' big chance to expand its reach to a larger audience, bringing it back to the big screen after the last few entries have been relegated to handhelds and Nintendo platforms. Monster Hunter: World launches on PS4 and Xbox One on January 26, coming to PC at a later date. It just might the biggest adventure we've seen from Capcom's flagship franchise. I went hands-on at Tokyo Game Show to see a new portion of the map and found a lot to love. Here are my biggest takeaways. Newcomer Friendly
Monster Hunter hasn't been the easiest series to get into, as there's a steep learning curve and the controls have sometimes been obtuse. Monster Hunter: World's combat feels the smoothest it's ever been, and I was able to navigate the world with ease. I chose the dual blades for my demo, but the game has a slew of weapons, including everything from lances to bow guns. The dual blades are quick and doing combos comes naturally as you tap different attack buttons. As always, you need to watch your stamina meter to make sure you can pull off the best moves to defeat the beasts that roam the land. You have to consider things like demon mode, which makes you faster and stronger, but drains your stamina faster. Using that as you're just about to polish off an enemy comes in handy. You can also craft items like bombs and poison knives to help in your adventure. If you wanted to, you could even sneak up on a sleeping monster and place bombs all around it for a satisfying kill.

Additionally, this entry eschews the familiar loading screens once you're out of the hunt. Without areas to run between, I was able to chase foes across wide expanses without ever losing track of them due to the seamless world. It's a huge step, and one I'm happy to see. Fun With Friends
This entry, like previous entries, does have co-op, letting you take three other friends with you on hunts. Lobbies allow for bigger parties that can then split off into groups of four and play. There's something about working with friends in this vast world full of discoveries and seeing everyone on screen attacking these gigantic monsters that is engaging to boot. In my demo, I followed scout flies that became more prominent as I approached the monster I was tracking down. Once you spot the footprints or other telltale signs, you follow them, but you can also stop and pick up items and kill other enemies along the way for loot. Your whole party is on the hunt, and once someone finds the creature you're tracking, you're alerted on the map to its location, so you can help take it down and enjoy its spoils. Creative Ways To Kill
Part of the fun of Monster Hunter is taking down baddies in unique ways. Monster Hunter: World lets you use the environment around you to great effect. When my party finally discovered a massive rock lizard called Barroth, we pulled out all stops to defeat him. You use your slinger to knock giant rocks on a monster, climb up on surfaces and jump down and mount him rodeo style, or even lure him into vulnerable positions. In my demo, my teammate led him toward a craggy rock, which he smashed his head on. This immediately knocked him to the ground, allowing us to wail on him for a few moments. At one point, we bait him into an area with another monster. Because there's a living, breathing ecosystem, monsters will battle for dominance and attack one another. Our plan works, as Barroth limps away to hide, which lets us know we're close to finally killing him. He goes hiding into the mud, flinging it at us as his last move of desperation. Getting Rare Loot Makes The Experience
Fans of the series shouldn't be surprised by this, but finding better gear and weapons is a delight. All monsters have breakpoints, where you can cut off parts of them for additional loot. In my demo, a teammate successfully chopped off Barroth's tail, not only damaging him further but also getting us getting goodies for doing so. The gear you get for taking down monsters all resembles them, from their feathers to skin type, which is a nice cosmetic touch. It certainly is a badge of honor. Final Thoughts
I had a lot of fun in my hands-on time with Monster Hunter: World. This entry isn't rewriting the series' formula (it didn't need to; it's an engaging loop), but improving it and taking it to new heights. This world is the most engaged I've ever been with the series and I love that you can fully immerse yourself in it, such as watching the ecosystem play out before you to camouflaging yourself in bushes to get an edge on monsters. I can't wait to figure out some cool ways to take down beasts and craft some awesome gear in the process. The monsters are getting more intriguing, looking bigger and more detailed than ever. Hopefully, the entire adventure provides enough variety and discoveries to keep players invested. If so, I could see myself spending a lot of time on the game when it launches early next year. 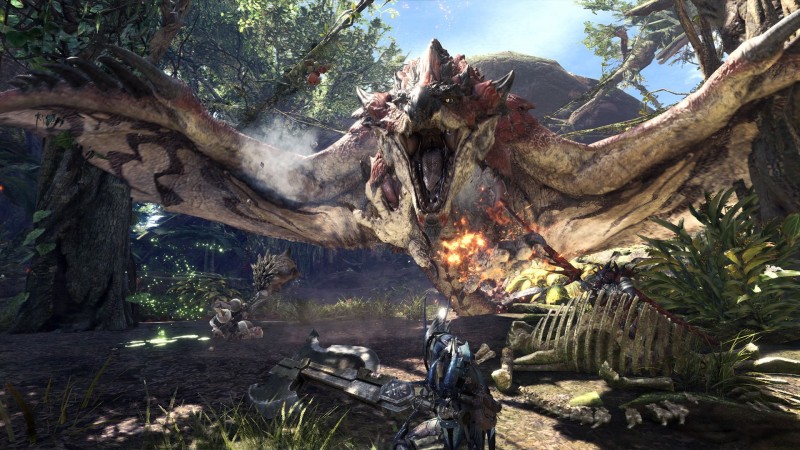 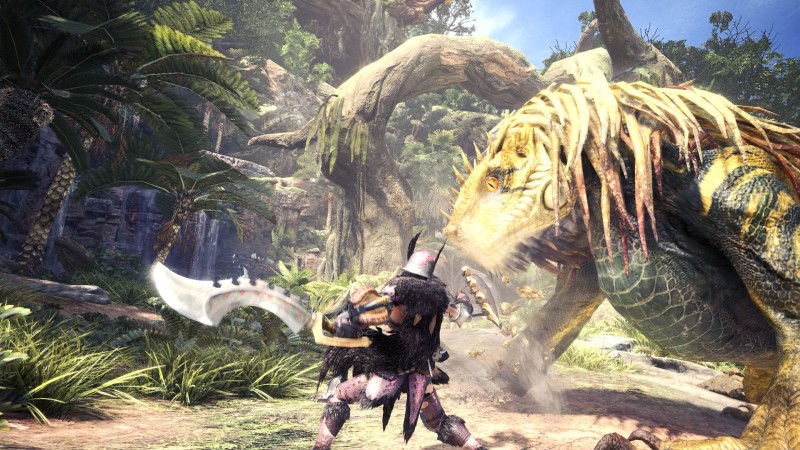 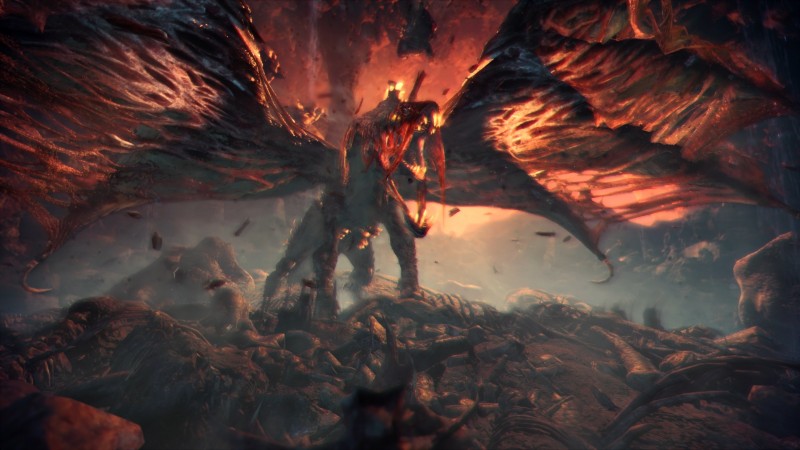 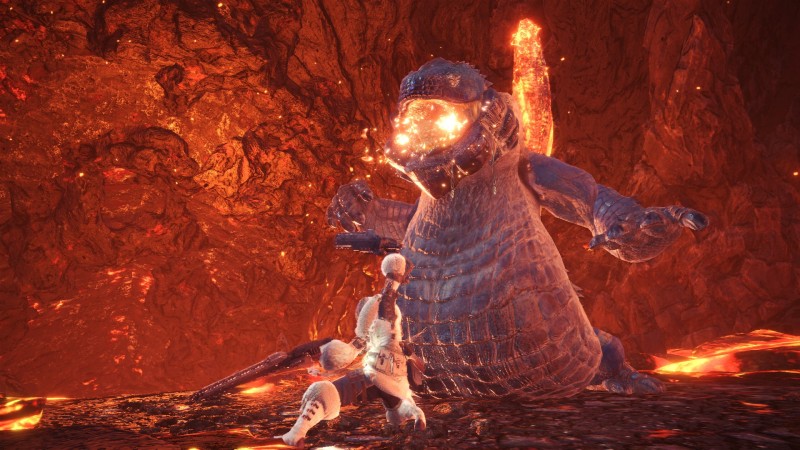 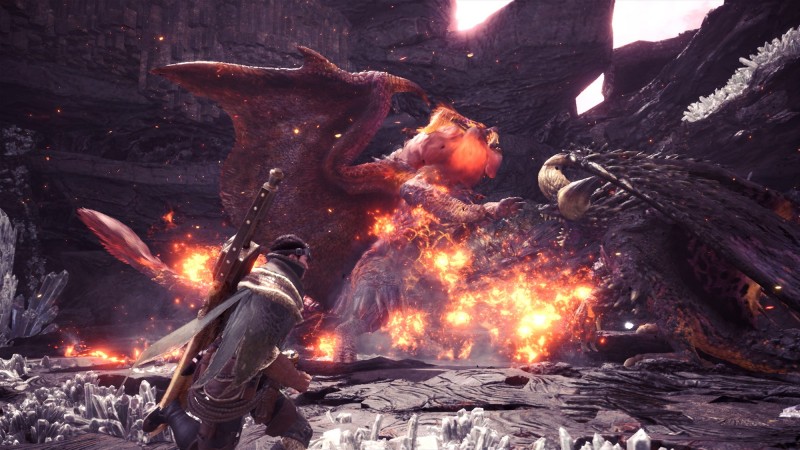 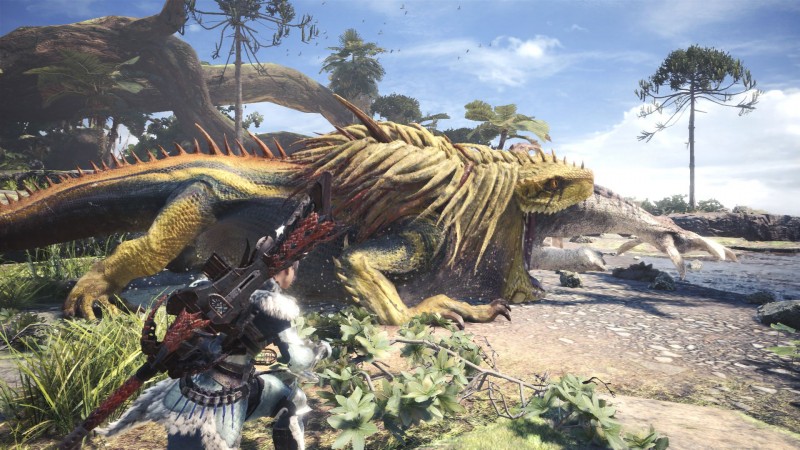