There are apparently perks to being a popular game appearing exclusively on a Nintendo platform. Capcom's upcoming 3DS title Monster Hunter 4 Ultimate is getting a dose of Metroid's famous bounty hunter – though it is technically her equipment and not the heroine herself.

In a post on Capcom-Unity, the developer confirms that items like Samus' power suit, cannon, and zero suit will appear in the North American release of the game in early 2015.

While it is certainly a cool addition, it isn't a huge surprise. We already knew that Link's iconic equipment is also included, and it is probably just a matter of time until we hear about another popular Nintendo character showing up.

Until then, watch the trailer below showing the Samus gear in action. 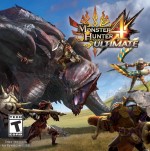