When ModNation Racers was first demoed at E3 last year, we were taken aback at how easy and intuitive the track builder looked to use. Sony asked us to check out the game again at GDC, we jumped at the opportunity to dig deeper in the revolutionary kart racer.

As United Front Games producer Dan Sochan started the game, he proudly showed off the unique frontend. Rather than offer gamers the standard start screen, the game immediately throws you behind the wheel in a small hub world. Here you can cruise around a small cul-de-sac to work on your moves, play crash derby with 24 other players if your console is connected to the PlayStation Network, or cruise over to the gates for racing or building a new track. While cruising along with other players, you can also take a glance at their "collector cards," which shows you the person in question's racing stats, and thumbnails of the tracks he or she has made. For the sake of the demo, we fired up the builder toolset.

ModNation Racers offers four distinct settings for you to craft your track - a jungle, alpine, seaside, and desert. Once we picked our jungle theme, Sochan suggested we terraform the area to our liking. We sorted through several selections and opted to go with the mountain maker. With a simple click of the X button, the game instantly transforms the land highlighted in the brush your using. The longer we held down a button on an area, the hills climb upward and eventually become mountains. Altering your brush size allows you to cover a greater amount of ground more quickly. Once we carved out some valleys and lowered the elevation in a few spots to create pools of water it was time to start laying out the track. To do so, all you need to do is start driving, and the track will form behind you. While you're plotting the course, you can adjust the track elevation on the fly by using the triggers. The track maker dynamically shifts depending on the terrain, burrowing through mountainsides and throwing up bridges over water as the situation dictates. Once we finished the track, the game prompted us to either auto populate the map or build the setting piece by piece. One click of the button and suddenly the map sprung to life with trees, power-ups, obstacles, speed boosts, and houses. Thankfully none of these options will be locked when you buy the game, but the game will reward you with new unlockables as you play through single-player mode or spend time interacting with the community. Voila - a new course to race in less than five minutes!

One the auto-population finished, Sochan gave us a tour of the refinement tools. Simply select the tool you want to use, and suddenly you're changing the track width, rounding out turn banks, creating tunnels to race through, and changing the pavement type. ModNation also allows you to create logic rules to create traps on your track. We laid down a speed boost, and linked it to a panel just a ways down the road that shoots fire once the boost is triggered. At any point during the building process, you can also jump onto the track for a test drive.

Once your track is complete, you can upload it to the game servers for others to download, rate, and comment on. If you're not the sort to start from scratch, ModNation Racers also gives you the opportunity to download other people's tracks and alter them as you see fit. Once you're done reconfiguring the race course, you can upload the track for everyone to see. The original track creator still receive credit for the track, and you'll be credited for the remix.

We didn't get a chance to test out the racetracks United Front created, but Sochan did share some other exciting details about the game. To support couch play, ModNation Racers features four-player split-screen and two-player online split-screen racing. The online races feature 12 competitors, and the game is launching sometime this spring. As we parted Sony left us with a preview build of the game, so check back in the coming weeks for more impressions of this bold new kart racer that may be leaving Mario Kart in the dust.

Be sure to check out the GDC 2010 hub page for quick access to more news and hands-on impressions from the event. 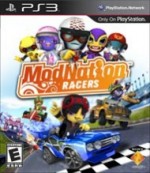