Codemasters is bringing back the Micro Machines franchise it started back in 1991 to PlayStation 4, Xbox One, and PC (a mobile version came out last year) this April, complete with weaponized vehicular combat, racing, and some very appropriate licenses.

Micro Machines World Series features supports up to 12 players (including 4-Player local play!), with a dozen miniaturized vehicles – each with their own specialized loadouts and abilities – racing and battling in towering real-world environments. Various customization options also allow players to make each machine theirs.

Details are a little scarce at the moment (like if World Series adopts the original's top-down camera), but the game includes race, elimination, battle arena, and team play modes (the latter includes capture the flag and king of the hill variants). It also features classic environments such as the kitchen, workshop, and garden, and makes use of licenses such as Nerf, Hungry Hungry Hippos, Ouija, and G.I. Joe. 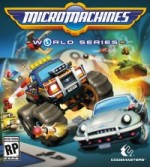