The Metal Gear series has always been about great story-based, single-player experiences, which is why Konami's decision to make Metal Gear into a co-op survival experience with Metal gear Survive was concerning. Today Konami released a trailer with an extensive look at Metal Gear Survive's single-player campaign and, unsurprisingly, it's all about survival.

Yuji Korekado, a producer on Metal Gear Survive, opens the video by explaining that Metal Gear Survive, a spin-off from Metal Gear Solid V: The Phantom Pain, will take place in an alternate timeline from the mainline Metal Gear games. The survival spinoff starts where Metal Gear Solid V: Ground Zeroes ended, with the destruction of Mother Base by the villainous XOF organization. Just as the base is destroyed, a wormhole opens up and sucks in debris and soldiers alike into an alternate world. As a Mother Base soldier, players narrowly escape this fate, but several months later they are tasked with entering the wormhole and establishing a forward operating base by a mysterious organization.

After this wacky setup, the campaign quickly sets up Metal Gear Survive's resource harvesting and base-building mechanics. True to its name, Metal Gear Survive features a lot of elements taken from the survival genre. You'll have to hunt animals, cook food, gather resources, and build defenses like electric fences and turrets in order to survive against wanderers, the crystal-headed definitely-not-zombies that occupy this alternate world.

There are main missions and side missions in the single player campaign, however Korekado focuses much more on the Base Camp, Metal Gear Survive's version of Mother Base. The Base Camp will be your home and throughout both the multiplayer and single player you'll be able to add defenses, farm crops, and create resource development facilities in order to increase its strength. Much like in the Phantom Pain, you'll also be able to recruit people and assign them to different teams within your base to increase its capabilities.

The trailer also notes that single player will be inextricably linked with multiplayer in several ways. Ammo is scarce, which means there is an increased focus on melee weapons and bows. Many of these weapons, including a flaming baseball bat, can be crafted using recipes, which can only be accessed through the co-op multiplayer portion of the game. The hardest enemies and missions can only be tackled in multiplayer. Any resources gathered in multiplayer can be used to build your personal Base Camp.

Metal Gear Survive might have the Phantom Pain's combat and visuals, but it's clearly a different beast. We still have yet to see how the survival elements and multiplayer-focused design will pan out, but we'll see if Metal Gear Survive is a worthwhile game in its own right when it launches on February 20.

If you're curious or excited to get your hands on Metal Gear Survive, you can try the beta when it launches in January. 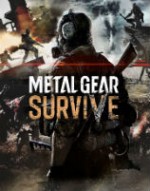