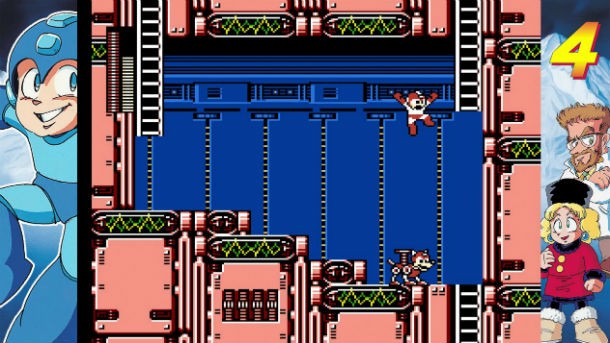 Mega Man, in all his 8-bit glory, is making the leap to the current console generation. Today marks the digital release of Mega Man Legacy Collection for PlayStation 4, Xbox One, and PC. A physical release is coming in early 2016 for those systems and the Nintendo 3DS.

The gallery below features screenshots from the new game, but also includes original concept art from the inception of the Mega Man series. Those images and hundreds more are featured in-game, through Mega Man Legacy Collection's Museum Mode along with a database of enemy information and a music player filled with over 100 tracks from the Mega Man series.

All six original 8-bit Mega Man games are featured in the collection, but that isn't to say Mega Man Legacy Collection doesn't bring anything new to the experience. A new Challenge Mode is included in the bundle, filled with remixed levels from across the series and global leaderboards for fans to compete on the new levels. Some of these challenge levels can be found in the gallery below. For more on the collection, check out our E3 preview of the game.

Mega Man Legacy Collection is out now for PlayStation 4, Xbox One, and PC for $14.99 with physical and 3DS releases coming early next year.