Mario and friends are back on the court, sporting a flagrant disregard for the rules of tennis. A new batch of screens and a trailer highlight the absurdity.

Curve shots, giant characters, and flaming scorch marks (mind the grass, guys!) prove the Mario Tennis series still prioritizes frantic fun over actual tennis, and that's fine by me. Granted, the supersized characters seem like overkill, but the visuals look great. The biggest foul? Toadstool is refereeing and playing – even if it's a different Toadstool, it's a major conflict of interest. It's like they don't even take the game seriously!

Mario Tennis Ultra Smash features one-versus-one and two-versus-two multiplayer, new characters, and new powerups. The game is set to come out in late 2015.

You can get a full rundown of all of Nintendo's E3 announcements in our Day Two Recap. 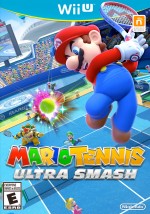