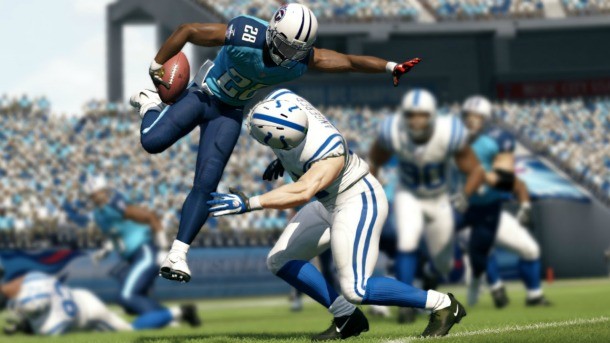 We've already talked about Madden's new passing game, but there's much more in store for the franchise. The gameplay improvements continue with the new Infinity physics engine, as well as an overhaul (again!) for the series' stagnant franchise mode.

The engine takes into account a number of players' physical attributes – including even muscle tension – to determine a variety of outcomes, from how effective a stiff arm is to what kind of tackle results from a ball carrier bracing for contact.

What effect this engine has on tackles also extends to what happens after first contact. Players' balance is a factor as they drag tacklers as well as trip, stumble, and react unexpectedly to contact.

I played an early version of Madden with this new physics engine, and I definitely noticed how it affects the ball carrier and would-be tacklers. I didn't see true gang tackling, but the influence of multiple defenders around the ball carrier is better than previous Madden's solo-only tackles. Three players might not all clamp their arms around the running back, but their interactions seemed to have more of a direct influence on the tackle.

Even though you have to be aware of any kind of contact to your ball carrier, from arm tackles to players on the ground and your own linemen, it didn't hamper how I normally run with the ball or make me hesitate in hitting the holes. 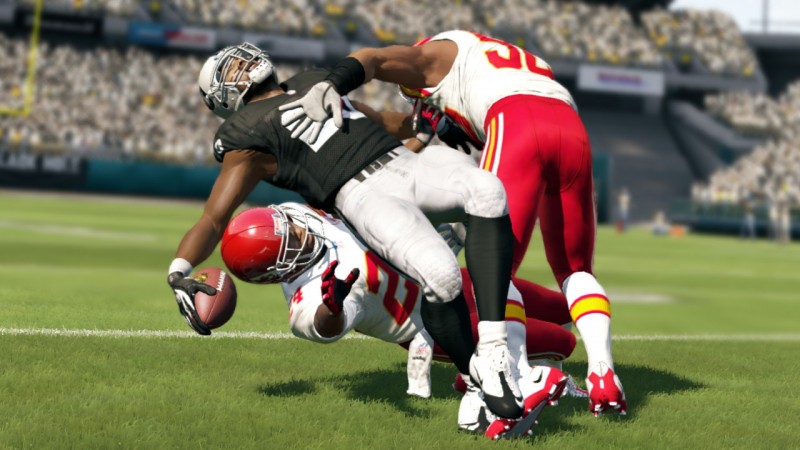 Similar to NHL 13, Madden 13 is combing its offline and online career modes into a single, all-encompassing mode called Connected Careers, but it's also going a few steps further. Thankfully, online franchise players will finally get all the features of their offline counterparts. Madden's old Superstar mode has also been subsumed into Connected Careers as well.

Your career franchise can contain just you, or it can be filled with friends – all of whom can choose between being a player or a coach. Being a player is more like Superstar mode, while being a coach is like Madden's traditional franchise mode. You can even retire and switch your player/coach role without having to restart your entire franchise (there will be a limited number of times you can do this). 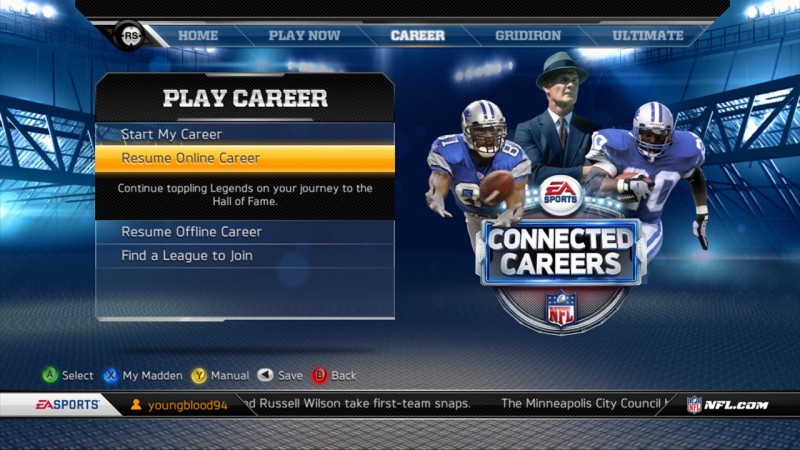 Being a player (whether a fictional one you've created or one already on a roster) exposes you to content that's an upgrade from previous Superstar modes. You first choose a backstory (high, mid, and low-round draft pick) and a type of player (like scat back, power back, etc). These choices determine your starting ratings and abilities. You start out lower on the depth chart and have to work your way up by earning XP through completing over 900 objectives (weekly, season, career milestones, and fantasy football style stat achievements), in team practices, and by playing the scenario-based Madden Moments. This is different than the previous Superstar points system. The XP you earn is spent on upgrade packages to improve your player, and these cannot be bought with real-life money.

Coaches also earn XP by meeting objectives. If you're holding the clipboard, you can buy upgrade packages that give certain positions stat boosts. Coaches also control front-office functions like scouting during the season, free agency, trades, etc. Thankfully EA changed how some of these features operate from Madden 12. You'll go into the draft with more info for players even if you don't scout them during the season. If you do scout someone, you'll find out more about them than just their ratings. This includes information on what kind of schemes they're best used in and their intangibles. You can also choose which skills to scout, which should help you avoid wasting valuable scouting time to find out an offensive lineman's throwing power. 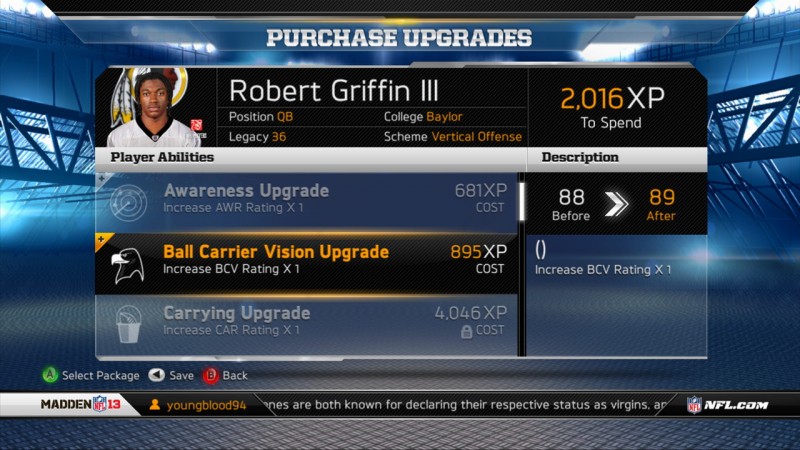 Free agency has ditched the eBay-style bidding system of last year in favor of a round-based structure where everyone puts in offers that are processed before the next round begins. This time players have their own desires when it comes to judging where they want to go such as the head coach, overall money, years on the contract, and more. EA didn't comment on whether this information is surfaced to users or whether it's all under the hood.

If you're playing in an online franchise with friends, the commish can pause the draft, and picks can be automated based on your preferences if you cannot attend. Unfortunately, the commish cannot pick for you.

While your franchise progresses from week to week, you'll get news updates from 13 real-life media figures like Trey Wingo, Adam Schefter, and Skip Bayless (groan), who will not only report on what's going on in the league, but may also break stories such as revealing who you've been seen scouting or who you have on the trading block. These kind of surprise events occur elsewhere in Connected Careers in an attempt to shake up the season-in-season-out predictability. A player might choose to play in the NBA instead of being drafted, players/coaches can return from retirement, players decide not to run or get injured at the NFL combine, etc. This stuff will change from year to year. 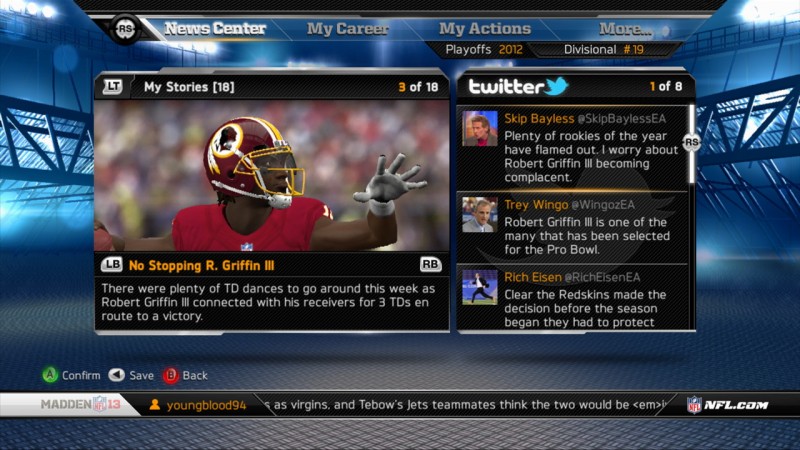