Avalanche Studios, the team behind the Just Cause series, is turning its open world skills to a game based on the iconic Mad Max movie franchise, and so far the results look impressive.

Mad Max has been rumored for some time, and at E3 Avalanche and publisher Warner Bros. Interactive made it official. The game is a new, original Mad Max adventure that Avalanche said was a "standalone" plot, so don't expect any hard ties to the existing Mad Max storylines. As you might expect, given star Mel Gibson's now more controversial public profile, the game's Mad Max is a new design, featuring an athletic, bearded Max. However, the iconic leather costume remains.

Avalanche has demonstrated an ability to create massive open worlds with Just Cause, and Mad Max, slated for next gen consoles, has an enormous map. Even the part we saw, which comprised roughly only one-fifth of the total world, appeared to be massive. Obviously, given the franchise, the environments are largely rough, barren desert; you can even see the wreckage of old ocean liners where the sea once was.

Mad Max's patchwork, rough metal vehicles are as iconic as the character, so the game places a heavier emphasis on vehicles (and vehicular combat) than most open world games. And, the world is truly open -- you'll be able to offroad literally anywhere on the map that a real vehicle could reach.

Throughout the game you'll collect scrap metal and other object that help add to your car. The customization screen we saw featured hundred of different options, from front ends designed for ramming to heavy armor to weapon turret add-ons to nitrous and other performance addition. Avalanche is emphasizing vehicle physics, so each part you add to your car will actually affect the turning, weight distribution, etc. Frankly, the tuning options looked to be as deep as some proper racing games on the market.

The E3 demo showed off car combat in the game, but don't expect Twisted Metal style projectiles and theatrics. This is brutal, primitive car-to-car combat, largely using your vehicle as the weapon itself, and ramming cars off the road will be one of your main attacks. As Max and his two compatriots pulled close to an enemy, one of the foes leaped from his car to on top of Max's, forcing Max to stop driving for a second to shoot him off in a quick Bullet Time-style sequence. The person riding in the back of the vehicle will also be able to use a harpoon weapon (connected by a rope) to pull off wheels and sections of armor from an enemy vehicle.

The demo also showed Max engaging in combat out of the car. After arriving at an encampment called Dead Barren Pass, Max must infiltrate it. The gate is blocked, so he exited the vehicle and fought his way up a ridge to take out a sniper. On the way, the he showed off the game's brutal combat, which was extremely violent and featured such gory fatalities as Max shooting an enemy in the belly with a sawed off shotgun and obliterating another with an explosive harpoon.

Although melee combat is a bigger focus than in most open world games, there are weapons, including a sniper rifle which Max used to explode gas canisters, opening the gate. After the gate had been breached, Max hopped back in his vehicle and drove through a hail of explosions and gunfire. We never got to saw what happened next, as the demo cut off which a brief highlight reel of combat and other footage from the game. However, what we saw was enough to pique our interest. The game is fairly early and will likely not come out until 2014. 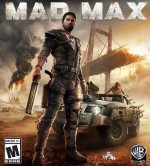