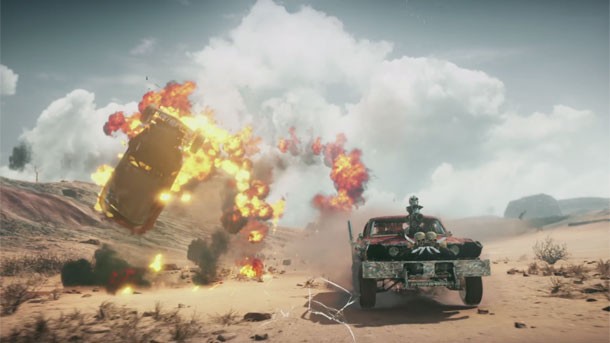 Two years ago, I saw Mad Max at Gamescom. At the time, I drew distinct parallels to Far Cry's stronghold takeovers and Borderlands' vehicular moments. Not much has changed, and that's supremely disappointing.

I wasn't wowed by Mad Max two years ago, and I didn't love my hands-on time with it today mainly due to some nagging minor issues that kept getting it my way. The controls in the car (and interacting with it) aren't fluid. Nearly every game that blends vehicles and on-foot combat uses a tap of the Y or Triangle button to get into a car. In Mad Max you need to hold the button. It sounds like a minor thing until you realize how ingrained Grand Theft Auto (and its pretenders) are in your muscle memory.

The user interface when in the cars isn't clean. I had a difficult time telling which enemy cars were still in play as I was whipping around the wasteland at top speed. I often ended up harpooning the wrong object, and the fine aim is clumsy.

On-foot combat is better, but that's largely because it apes Rocksteady's polished Arkham series. Enemies are overtly color-coded so you know what type of resistance you'll face, with counters and finishers more Red Hood than Dark Knight.

With release just a month away, I'm hopeful that we'll find more to Mad Max than upgrading a car that isn't much fun to drive. The world provides so much room for narrative depth, and it would be a shame for Mad Max to simply become an episode of Top Gear: Post-Apocalypse Edition.

For much more on Avalanche's trip to the wasteland, check out our coverage hub from April 2015.