Getting By With A Little Help From Your Friends In LittleBigPlanet 3
by Kimberley Wallace on Jun 10, 2014 at 03:46 PM
Publisher: Sony Computer Entertainment
Developer: xDEV/Sumo Digital
Release: November 18, 2014
Rating: Everyone
Platform: PlayStation 4, PlayStation 3 Sony received much enthusiasm for its E3 press conference announcement of LittleBigPlanet 3. The original platformer stood out for its creativity and adorable mascot Sackboy, but this time around, he has some friends to help him get through levels. We got to test out a 4-player co-operative level, showcasing what Sackboy’s new pals bring to the table.

Unlike previous entries in the series, where everyone had the same set of abilities, LittleBigPlanet 3 provides three new characters with their own unique powers. If you play as Swoop the bird, you can fly to high areas or pick up the other players, providing extra opportunities to collect hard-to-reach stickers. Oddsock is super fast and his speed allows him to wall jump. Toggle is a transformative character. In his regular form, he’s heavy, stands on switches, and he’s also your brawn. He can pull heavy objects barring the path forward to get the gang around. You can also transform him to a mini version that can squeeze through small areas. Honestly, from our demo, he was doing a lot of the heavy lifting as his abilities afford him a little more flexibility to get everyone around.

We only played one brief level in our demo, but it was clear everything that’s fun about the platforming was in place, like switching between planes and finding a way to navigate through the level via the various obstacles and jumping puzzles. The basic gist of the gameplay was using your character’s distinct ability to afford the others a path. I worry about the balance in levels in regards to different character abilities. Levels might cater more to certain ones than others, especially the user-generated ones. That could leave someone out and potentially bore other players during certain sequences. That being said, the platforming was smooth and felt on par with other entries. Additionally, you can also customize your character regardless of who you choose and put them in costumes. I played as Oddsock and put him in a monster suit to make him even more distinct on screen.

The 4-Player multiplayer is accessible through adventure mode, or you can take the gang through user generated levels. You can still use your couch and four controllers or play online for multiplayer, no matter your preference. We can't wait to see more levels, as we have a feeling things will only get more creative from our brief introductory one.

LittleBigPlanet 3 releases some time in November. 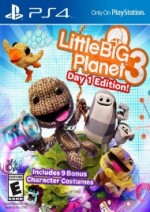