If you’ve been playing Final Fantasy games since the 8-bit era, you might (like me) have a soft spot for the sprite-based art style. The Final Fantasy XIII saga isn’t for everyone, and I have to wonder how much differently it would have been received if the games were designed as they look in this story recap.

The video tells the stories of Final Fantasy XIII and XIII-2 in broad strokes to catch players up. This approach is clever, as it doesn’t necessarily ruin the first two games for those that want to go back, but still provides enough context to get started on Lightning’s costume-filled adventure.

Lightning Returns: Final Fantasy XIII is coming to PlayStation 3 and Xbox 360 on February 11. You can check out a hands-on preview here and a recent interview with producer Yoshinori Kitase here. 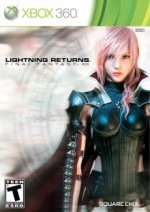