The PAX Prime Indie Megabooth is always a great spot to find new and interesting game concepts. One of the first games to jump out at me this year is Stage 2 Studios' Lifeless Planet.

As one of the earliest games to seek funding on Kickstarter, Lifeless Planet has been in the works for nearly two years. The project is the the first game by David Board, an Alaska-based developer who cut his teeth in video production and interactive design.

Inspired by games like Out of the World, Ico, and Myst, Lifeless Planet tells the story of a NASA astronaut who journeys light years beyond Earth to explore a planet identified as being capable of sustaining human life. After a rough landing, the astronaut is left unconscious amongst the debris. Upon waking, he realizes he crew has moved on without him. Far from the scientist's prognostications, this planet hardly looks capable of supporting human life. Rocky desert terrain dominates the landscape.

Much like Journey, Lifeless Planet features breathtaking vistas and a sprawling environment. At first glance it appears to be an open world, but Board says each explorable area is story driven, with clear objectives. The playable PAX demo focuses on a region where the astronaut must navigate a series of rocky platforms with the help of his jet pack and solve Myst-like puzzles that require him to manipulate mysterious rock structures emanating a green colored energy.

Like a classic Twilight Zone episode, as the astronaut explores more of the planet he comes across an abandoned Soviet settlement. The rest of the game involves finding out what happened to his crew and this colony while pursuing an alien-looking woman who speaks Russian, wears a Soviet uniform, and leaves glowing green footprints in her wake.

The demo was brief, but the tiny slice of gameplay has me excited to see more from Board's first game project,. He says says Lifeless Planet is slated to come out on PC and Mac platforms later this year, and the studio is currently meeting with the three major console platforms as well to explore their options in that space. 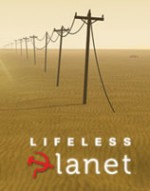