Before the Storm, a prequel to Dontnod’s Life is Strange, is arriving as soon as next week. The three-episode-long series has a lot of changes by having the player embody Chloe Price, Max’s best friend, three years prior to the events of the first game. It also has a completely different development team behind it – Deck Nine – all the while Dontnod is working on its own Life is Strange follow-up. After seeing an extensive presentation, interviewing the developers, and playing a part of the first episode ourselves, I feel a lot of positive changes are on its way for Life is Strange. Here are five ways the prequel changes things up.

Forgoing the time travel powers of the first game, Before the Storm instead introduces a new gameplay mechanic that takes the form of a dialogue puzzle. Each time Chloe is conversing with someone who she hopes to persuade, the option of using Backtalk becomes available. Backtalk has Chloe use her wit to throw insults back at the other character, or cleverly try to change their perspective.

In the demo I saw, Chloe successfully wiggled her way out of an uncomfortable situation with Principal Wells who suspected that she had recently smoked a joint. In another section, she talked her way past a gangly bouncer to enter a concert. Backtalk is optional, and even if you fail a sequence, you can just find another method or route.

The reason for leaving time travel powers behind, outside of canon reasons, is because developer Deck Nine wants the game to center on realistic characters and storytelling. “We didn’t want to focus on science fiction, but instead what we think was so courageous about the first game: authentic flawed characters, and a story that was, despite the time travel, incredibly well-written,” lead writer Zak Garriss says.

Focusing On Chloe And Rachel’s Relationship

In Before the Storm, Chloe’s life feels like it's crumbling. Still grieving her father’s death, she begins to push others away, fail classes, and make more destructive decisions. “In the first Life is Strange, Chloe Price was this confrontational, blue haired, beanie-wearing badass. In Before the Storm, we’re gonna go into the backstory about how she became who she is in the first game,” producer David Hein says.

Things start to look up when she meets Rachel Amber, a girl that is popular and successful – a stark opposite to Chloe. The bond they form becomes strong and unwavering, as Chloe helps Rachel uncover a secret that could destroy her family. As for the nature of their relationship, it depends on your choices, meaning that the friendship may also dip into romance should you decide to go that route. A Grittier View Of The World

Taking place again in Arcadia Bay, you’ll see a lot of familiar places, but from a different perspective. For example, Chloe refers to Blackwell High as “Blackhell” and causes a lot more trouble than Max. She has a more pessimist view of the world, and is quick to confrontation.

This doesn’t mean that you won’t visit new places, however. In the demo, I saw Chloe enter a warehouse-like building filled with punk rockers, where a concert for a band named Firewalk was being held. “When you’re playing as Chloe, you go to places Max wouldn’t go to,” Garriss says. “Like The Mill, that opening illegal concert. That’s not a scene that Max would fight her way into.”

The concept of having consequences that have a butterfly effect and come up over time returns in Before the Storm, but to a greater effect. In a playable demo, Chloe roams through a warehouse-like concert venue, where she can do a number of things such as steal a wad of cash. Multiple avenues of choice are available: if you take the cash, you can use it to buy drugs from Frank, who appeared in the first game, or keep it for another purpose, such as helping your mother as she faces financial woes. Even small details like buying marijuana means instead of smoking cigarettes the next morning, it’s a joint in Chloe’s hand.

Making Your Mark With Graffiti

Similar to how Max took photos and those acted as trophies and hidden collectibles for the player, Chloe instead makes her mark with graffiti. These are often witty remarks, such as writing “not a meth lab” onto an old RV. Areas that can be used for graffiti are often hidden spaces.

Life is Strange: Before the Storm comes out on August 31 for PlayStation 4, Xbox One, and PC. 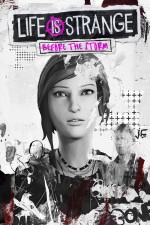