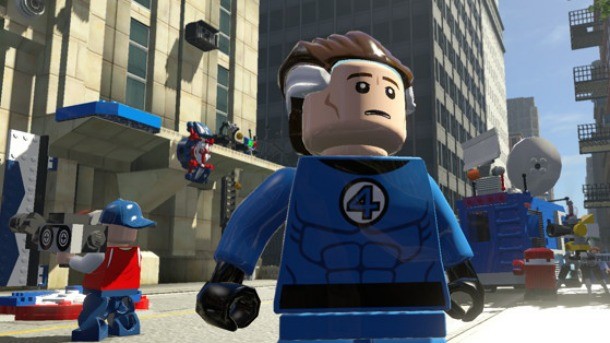 Galactus is coming to eat the world. Dr. Doom and Loki have teamed up and are making dastardly schemes. Only the world’s cutest superheroes can save the day.

After Dr. Doom blows up the Silver Surfer's board, the pieces are scattered across the world. Marvel’s roster of heroes decides to collect these pieces and reunite them because they may be the planet's only hope for salvation. Throughout the game, players will see Silver Surfer looking dejected and depressed in the background.

We’ve had several good looks at TT Games' promising new Marvel title in the past, but while at Gamescom 2013, we had a chance to tool around with a few new characters and explore some new powers for the pre-existing roster.

Some of the new characters that TT Games announced at the show include: Archangel, Ghost Rider, Rocket Raccoon who may be short but has a big gun, Captain Britain (who enjoys tea), Daredevil, The Hulk’s foil General Ross (who can turn into the Red Hulk), Curt Connor (who transforms in the Lizard), Spider-Man foe Mysterio, and the Super Skrull (who has all the Fantastic Four powers).

Impressively, each character has their own unique set of powers. After tooling around on the Shield Helicarrier for a bit, we dove down to the game’s Manhattan hub to explore Mr. Fantastic’s feature set. While Captain America took a parachute down to the island, Mr. Fantastic transformed his body into a giant kite and floated safely to the ground. Players can playfully stretch Mr. Fantastic’s body into useless objects like teapots at any time, but when needed the character can also do useful things like stretch into a bolt cutter and cut open locked gates or slim down and snake through vents. TT Games said that Mr. Fantastic will be able to turn into things like a fire truck and a screwdriver at various points in the game. The team also wanted to get Mr. Fantastic to turn into a Kangaroo at some point, but unfortunately didn’t have the time to make that happen.

Lego Marvel Super Heroes could be the largest Lego game to date. The title doesn’t seem to have any shortage of characters and their combined roster should keep comic fans busy for a long time when the game hits PlayStation 3, Wii U, Xbox 360, and PC on October 18 and then next gen systems later in November.