Though Warner Bros. owns DC Comics and rival entertainment monolith Disney owns Marvel Comics, the two corporations have put their differences aside in the name of gaming. Marvel Super Heroes is the first Lego game to feature the classic comic universe, offering up the series' trademark gameplay with over 100 characters.

As the first Lego Marvel game, Marvel Super Heroes has been designed by TT Games to incorporate a wide swatch of the universe, drawing from all forms of entertainment, be it classic comics, films, or cartoons. Throughout the game's 15 levels (a mix of open world and more traditional confined levels), you see iconic locations like Grand Central Station and Thor's home world of Asgard. Alternate versions of major characters based on various incarnations from film and comics are also in tow.

The characters have all the unique abilities you'd expect. Captain America can deflect laser blasts with him, Iron Man can hover and shoot repulser bolts, and Spider-Man uses Lego webs to traverse high platforms. The demo we saw teamed Spider-Man, Iron Man, and -- memorably -- Hulk as they platformed through Grand Central Station on their way with a showdown with a huge Sandman made up of swirling Lego blocks (clearly inspired a sequence in the film Spider-Man 3). The Hulk transformation sequence was adorable, as Bruce Banner squats down and flexes his arms in comedic rage before growing to twice his size. Lego likes the in-game Hulk so much that it's actually going to manufacture a larger sized Lego Hulk figure (along with a few other larger characters from the game like Abomination).

Switching between Hulk and Bruce Banner plays in with the puzzle solving, as you'll change back to Banner to platform to a switch, then back to Hulk to pull a giant sized switch. Every character will use their abilities in a similar fashion, whether it's Spider-Man using his webs to pull down a tower and Spider sense to uncover hidden items or Thor using his hammer Mjolnir to activate electrical switches.

In keeping in the new series tradition, the game has voiceovers, including a playable role for sarcastic fan favorite Deadpool.

Lego Marvel Super Heroes will release in late 2013 for all next-gen and current-gen systems. A separate handheld game for Vita and 3DS is also planned. 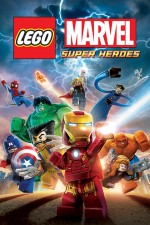