Lego Marvel's Avengers Pulls In More Of The Marvel Movies And Characters
by Mike Futter on Oct 09, 2015 at 07:00 AM 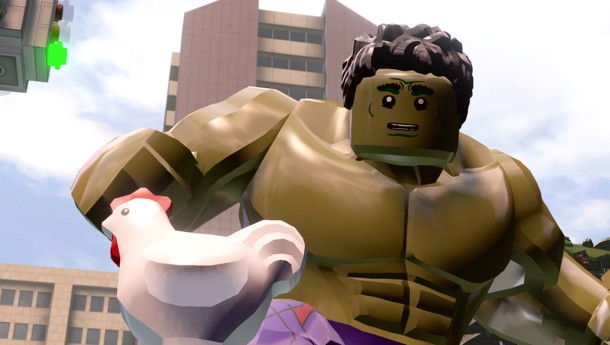 "You'd think that taking the [voice tracks] direct, would limit what you can do," Traveler's Tales' Arthur Parsons tells me. "But it's actually pretty cool." When I previewed Lego Marvel's Avengers at Gamescom, I enjoyed the Battle for New York and Clint Barton's farm segments, but worried a bit that the follow-up to Lego Marvel Superheroes was bound to the two Avengers films.

I was told at the time that more news was coming, and that the game had much more to offer than The Avengers and its sequel, Age of Ultron. Earlier this week, I found out exactly what a large chunk of that extra content is and how it's woven together.

In order to tell a cohesive story, Traveler's Tales is reordering the events and making use of flashbacks. The game opens up with an almost shot-for-shot remake of the opening scene of Age of Ultron. I say "almost," because there have been a number of changes for comedic purposes. "It has to be authentic, as well as fun," Parsons says.

The events of the first Avengers movie don't come in until the team retrieves Loki's scepter from Baron Strucker, cueing a look back at why it's important and the trouble it wreaked. In the same way, you'll revisit scenes from Captain America: The First Avenger, Iron Man III, Thor: The Dark World, and Captain America: The Winter Soldier.

The open world approach of the last Lego Marvel title returns, with eight different hubs. The largest of these is a more vibrant Manhattan with random crimes that you can stop. You'll also visit Asgard, South Africa, and Washington D.C.

While much of the game is derived from the events taking place in the Marvel Cinematic Universe (MCU), Haley Atwell (Agent Carter), Clark Gregg (Agents of S.H.I.E.L.D.), and others stepped in to record new voice work. While events aren't culled directly from those two spin-off shows, you will step back in time with Peggy Carter and explore her version of Manhattan.

I asked whether those shows were being held back for a follow-up title, but expectedly received a "no comment." The Netflix slate of Marvel programming (Daredevil, Jessica Jones, Luke Cage) will get nods in the character roster. However, given the more mature content of those shows, you won't see those events reflected. Sorry, Lego Kingpin will not remove a Lego thug's little plastic head with a car door.

On the bright side, Daredevil and other characters are getting some improved skills. The Man without Fear will be able to swing around the environment, for instance. Flight, driving, and targeting with ranged weapons have all been cleaned up and improved, according to Parsons.

This game's roster will dwarf the one found in Lego Marvel Superheroes. According to Parsons, that counts unique characters and not just variants like Captain America with and without his helmet.

Some of the new characters pull from the deepest section of the Marvel bench, including Egghead, Gargoyle, and the fan-requested Fin Fang Foom (who can grow to massive sizes). A number of fan-favorite characters like Hulkling, Thor (the new, female version), Squirrel Girl with her Squirrel Buster armor, and Devil Dinosaur (with his pal Moon Boy) make appearances. Parsons says that every character has a connection to The Avengers, even if it's a minor one.

Red bricks, which unlock special abilities, are handled a different way this time out. The Collector makes an appearance, issuing quests to intrepid heroes. Completing his requests unlocks the coveted red bricks.

While we didn't get hands-on this time (you can read my hands-on preview from Gamescom for that), we did get a look at just how deep this game is going to be. Not only does it expand into the broader MCU, but there's original content from some of the most charismatic actors in the lineup. There's still more to learn though, as WB Games and Traveler's Tales looks toward the January 26, 2016, release on Xbox One, Xbox 360, PlayStation 4, PlayStation 3, Wii U, 3DS, Vita, and PC.