Lara Croft is brave, resourceful, and not afraid to get her hands dirty. She’ll also challenge your mind in her next adventure.

While the simple swiping puzzles return, Lara and her environment are fully animated but retain a minimalistic appeal with almost no textures. You’ll need to figure out how to maneuver her past obstacles, like decaying platforms and spinning blades.

At Gamescom, I had a chance to play a bit and check out one of the newly announced boss fights. Where Hitman Go’s stages served as segments of an assassination, Lara Croft Go uses the mobile-friendly levels as steps toward solving grander puzzles.

For instance, in the jungle tomb I raided, I needed to build a large bridge to reach the lair of a giant snake boss. Navigating each treacherous level (of which there are 75) helped bring me closer to raising a section of the walkway. The boss fight requires reading a pattern and moving between cells accordingly to damage the huge serpent. The influence of Lara’s older adventures is unmistakable.

Lara Croft Go also features a number of objects hidden around the environment. These include gemstones and pieces of artifacts. These are often obscured, and more than once I didn’t notice one until I had swiped through the last space and was exiting the level. These will add replay value for those looking to squeeze as much out of the game as possible.

You won’t have long to wait to try Lara Croft Go for yourself. Square Enix plans to release the game on August 27 for iOS and Android. 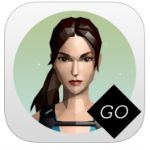