Rockstar and Team Bondi’s L.A. Noire is one of the most anticipated games of the year. Blending Rockstar’s signature open-world gameplay with a breathtakingly original system of investigation and interrogation, this dark detective saga stares into the seedy black heart of 1940s Los Angeles.

We gave the world its first in-depth look at the game in issue 203 of Game Informer. You can read the full story online here. However, for those of you looking for a more condensed overview of the game, we’ve culled all the important intel on the game into this feature. This is everything you need to know about L.A. Noire.

After you finish, get more depth by reading our cover story on the game.

L.A. Noire is a relative rarity for Rockstar – it’s not developed by one of the company’s talented in-house studios. The game is being crafted by a partnership between Rockstar and Team Bondi, an Australian company founded by Brendan McNamara. McNamara is most famous for being the head of Sony’s Team Soho, which made the gritty, Guy Ritchie-influenced open-world crime game The Getaway on PlayStation 2. In fact, L.A. Noire was originally an SCEA project, but later found a home with Rockstar and its parent company Take Two Interactive. Another key aspect of the game’s development is the groundbreaking facial capture animation technology (more on that later) which was created by a subsidiary of Team Bondi called Depth Analysis.

Though it’s not technically an in-house project, Rockstar has been intimately involved in helping guide the game. Rockstar’s super producer Jeronimo Barrera (who has helped ship nearly every Rockstar game in recent memory) has been working closely with Team Bondi to ensure that it has all the authentic attention to detail and gameplay depth the company’s other franchises are known for. 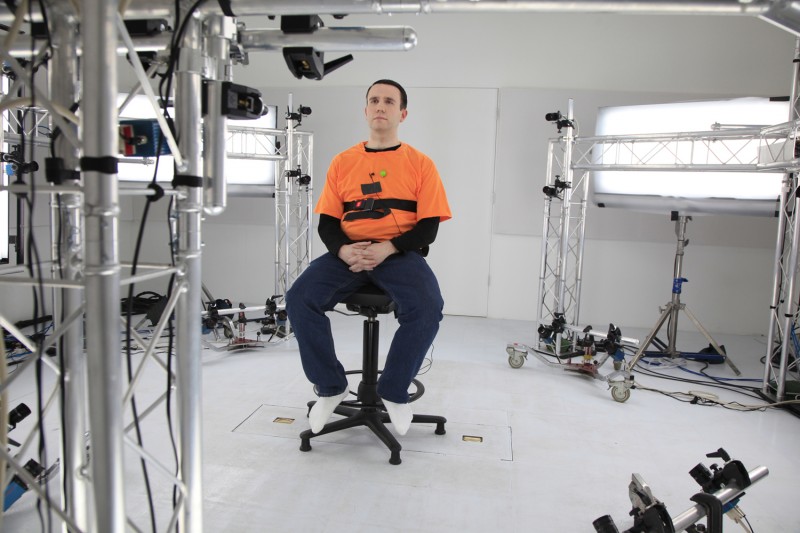 Games have taken giant leaps forward in facial animation in recent years. However, most games are still relying on conventional CG techniques, where animators spends arduous hours crafting each expression on an in-game character’s face during cutscenes. L.A. Noire is powered by a new technology, created by Team Bondi’s sister company Depth Analysis, that allows for facial “capture” similar to how motion capture techniques have been used to recreate in-game movement in the past. The big difference is that Depth Analysis’s process is done entirely through cameras, with no physical “markers” (think of the ping-pong ball suits you’ve seen motion capture actors wear before) being used.

It’s really akin to filming a scene in a movie. The actors in L.A. Noire are real actors, done up in make-up and period hairstyles. They sit in a room surrounded by a 360 degree array of 32 stereo cameras. As the actor recites lines to the director on the other side of the cameras (they interact through video monitors), the cameras instantly create a full 3D model of the actors head, capture all of their facial expressions, record all the dialogue, and transpose all the data into a form usable by the game. The result is facial animations that look a good deal more real than anything we’ve seen in a game before. This helps convey a real sense of emotion and – more importantly – allows you to read the faces of the people you’re interrogating. Without such realistic animations, the game would not be possible. 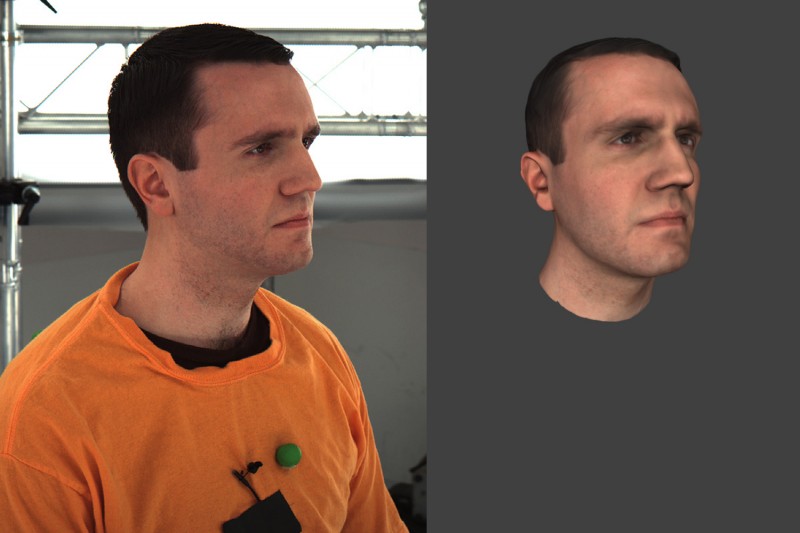 Not surprisingly, Depth Analysis has been shopping this technology to other companies, especially in the film industry.

Here's a trailer explaining the process. Also, read Dan Ryckert's piece about how Team Bondi put him in the game as a NPC.

L.A. Noire centers around detective Cole Phelps, an aspiring rookie in the LAPD. Phelps is voiced and acted by Aaron Staton, who plays Ken Cosgrove in the acclaimed TV drama Mad Men. Phelps served in World War II and is regarded as a war hero of sorts. However, in both our interview with Staton for our cover story and in speaking with Rockstar about Phelps, it’s clear that his activities in the war might not have been as heroic and many perceive.

“He’s a man with strong convictions and ambitions,” observed Aaron Staton. “He’s certainly conflicted and harbors some dark regrets and guilt about some of his actions in the past, in World War II. There have been promotions and accommodations that – to most people – would seem like a positive thing. But when you’re rewarded for something questionable, I think you carry a shame about it.”

Rockstar, in typical fashion, is being mum about Phelp’s backstory. But there’s clearly more to the tale. Whatever his background, we know that he joins the LAPD in 1947. The force at that time was extremely corrupt, something Phelps is forced to battle at every turn. During his career, Phelps will advance through a series of “desk” assignments: street patrol, traffic, homicide, vice, and arson. In each department, you’ll deal with different types of cases (though don’t worry, a simple traffic stop can turn into something much darker in L.A. Noire), as well as deal with different partners and captains – many of whom do not have your best interests at heart.

The cases themselves are culled from real-life events in 1940s Los Angeles – there’s even some that tie into the infamous Black Dahlia murders. From what we’ve seen, we can also tell that there’s a more overarching plot involving corruption in the LAPD, though Rockstar has not revealed much in that regard. Still, coming off of GTV IV and Red Dead Redemption, we trust in its ability to deliver a compelling story.  This trailer gives some hints of the larger plot going on in the game.

One of the most amazing aspects of L.A. Noire is its painstaking recreation of 1947 Los Angeles. While detailed open worlds are nothing new to Rockstar games, this is the first time that one of its games has attempted to create an actual historic locale. Team Bondi has spared no expense, using over 180,000 reference photographs culled from newspaper archives and hand-drawn maps of the city in 1947 from the Huntington Library. Everything, from small details like telephones or clothing to advertisements and long-vanished buildings, has been recreated. The street maps are also vintage – you’ll be able to see what it was like to drive in Los Angeles before the freeway system. 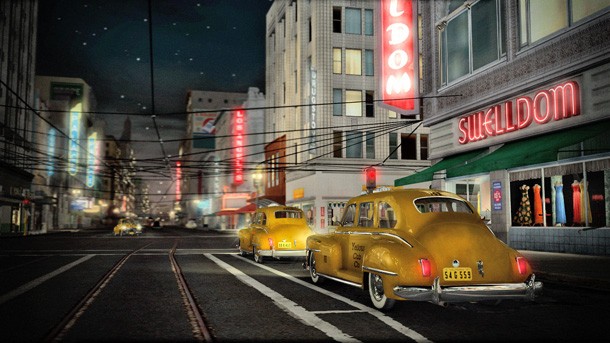 Rockstar estimates that the in-game city is its largest to date. It’s also the most detailed – there are over 140 fully rendered interiors in the L.A. Noire. Even shop windows will show period accurate products and displays. The cars are vintage as well; the team was even allowed access to television host Jay Leno’s storied car collection to photograph some hard-to-find automobiles.

From what we’ve seen, it’s as sprawling and impressive as GTA IV’s Liberty City, perhaps moreso, given that so much work has gone into creating a long-lost vision of L.A. However, it does not feel as interactive; there are pedestrians and the like but there’s not much to discover in terms of non-story content.

The period feel is dramatically enhanced by the soundtrack, which balances original noir-style film music and vintage jazz songs by artists like Billie Holiday.

On the surface, L.A. Noire appears similar to Rockstar’s other open-world titles. While the world is constructed in the same manner as a GTA title, the game’s pacing and gameplay couldn’t be more different. While there are the customary car chases and gunfights, the game does not place an emphasis on action. Click here for some of my previous hands-on impressions of gameplay.

The bulk of the experience revolves around detective work: examining crime scenes, gathering evidence, and interviewing witnesses and suspects. Generally, you arrive at a crime scene and begin to scour for clues. Walking around, you’ll get rumble prompts that let you know you’re in the vicinity of a clue. With a quick button press, you’ll kneel down and pick up the item. If another rumble happens, you’ll know that there’s more to examine, like opening a letter or turning over an item to read the label. Anything relevant to the case will instantly be transcribed in your notebook, which is your main way of tracking your case progress.

Armed with evidence, you begin to interview witnesses. It’s important to gather as many clues as possible before beginning your interrogations, as clues often open up new lines of inquiry that might not be accessible to you if you’re not diligent enough in the fact-gathering portion of the game.

The interviews are the real heart of the game. Thanks to the amazing facial capture technology detailed above, you’re actually able to “read” the faces of your subject, determining whether they are being truthful. You have three ways of responding – expressing doubt, believing them, or accusing them of lying. As in Mass Effect, you aren’t prompted with actual dialogue options, but you select the tone of the responses.

It’s a delicate balancing act. If you are too soft, you’ll let a suspect slide by with a dubious alibi. However, anytime you accuse them of lying, you must go into your notebook and provide a specific piece of evidence that refutes their testimony. If you fail, they’ll become emboldened and shut down.

All in all, L.A. Noire is an ambitious and unique game in Rockstar’s catalog. In attempting to combine the open-world genre with classic detective adventure gameplay, Team Bondi has crafted a title that stands apart in a market dominated by over-the-top shooters. We’ll have to see how this formula plays out over what is likely to be a very long game, but L.A. Noire is one of the most intriguing games we’ve seen in some time.