Just Dance Kids 2014 is coming to Xbox 360, Wii U, and Nintendo Wii on October 22. The Xbox 360 version of the game, which uses Kinect, allows kids to make their own music videos. The Wii U version of the game allows players to use the GamePad to send players dance suggestions.

Here's the announced track list – which before you ask, yes, it does include the Fraggle Rock theme:

You can also check out the six videos Ubisoft has released for the game below. 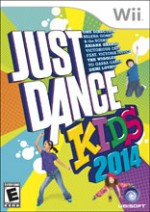