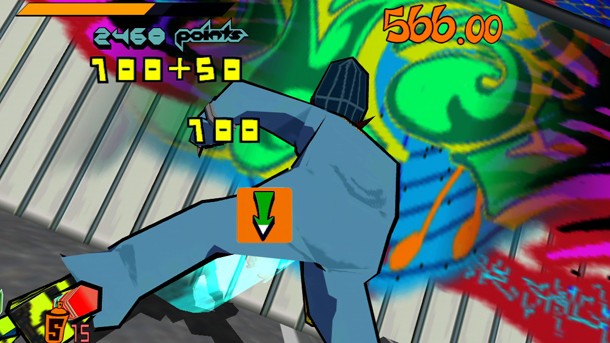 Dreamcast fans may remember Jet Set Radio by the name Jet Grind Radio when it originally hit the U.S. back in 2000. I recently got my hands on the game's high resolution re-release on PSN and XBLA, and the inventive graffiti-tagging romp still plays and looks terrific.

The goal of the game involves rollerblading around a crisp, vivid cel-shaded world hunting for spots to slap some spray paint. Applying your deviant art to public surfaces is as easy as following the on-screen analog stick movements. Things get a little trickier when the cops show up on the scene. Like any tagger with decent self-preservation instincts, you're going to want to dodge the police and the gun-wielding, pompadour-wearing detective. I'm a whole lot better at the game than I was a decade ago, but tracking down those last spray paint cans to complete your final tag is still tense. I also enjoy being able to control the camera with the right analog stick, something that wasn't possible with the Dreamcast's lone stick.

Sega says that fans of the original track will be happy to know the publisher has secured 80 percent of the original soundtrack. The spirited, pop-centric tracks will keep you toe-tapping while you paint the town. Speaking of painting, Sega is hosting a create-your-own-graffiti contest that artistic gamers can enter to have their creations featured in the game, along with a chance to win some cool prizes.

Jet Set Radio is the same game that blessed Dreamcast owners over 10 years ago, it just has the original Japanese title slapped on it. And if you never got a chance to play the original game, you've got the best chance to catch up when the re-release hits PSN, XBLA, and PC later this year.