In the world of 2D indie games, the roguelike is a popular genre. Randomized levels lead to new experiences every time you play, and the looming threat of losing all your progress at any moment is a powerful motivator. It makes games equal parts intense, rewarding, and incredibly frustrating. Games with comparable art styles and overhead perspectives like Nuclear Throne and the upcoming Below live in that genre, and it's understandable that Hyper Light Drifter would be compared to those games. When I first read of Hyper Light Drifter's announcement, I assumed it was a roguelike because it reminded me of those games. Hyper Light Drifter is not a roguelike, but the team at Heart Machine did toy with the idea for some of its initial prototypes.

In October of 2014, Heart Machine was preparing to release a small sampling of Hyper Light Drifter to its Kickstarter backers. It marked the first time the game would be available in any playable form to the public. That build, for a period of time, was going to have roguelike elements, but that changed just before release. It was a matter of looking back at the original promises of the game’s Kickstarter and deciding that randomized levels just wouldn’t work for the game. “It wasn’t really for us because we weren’t repeating a lot of the content. There is no grind loop for the game,” Hyper Light Drifter creator Alex Preston says when talking about the genre and its prevalence in the indie world. Hyper Light Drifter looks like it could be a roguelike if it wanted to be, but it has more in common with Zelda than it does Spelunky. “The combat we have is solid, but the random thing just really doesn’t work for us because we can’t do random rooms, we can’t do procedural because it’s all crafted. Alex is putting stories in there,” designer Teddy Diefenbach says. Preston jokes that the levels have been hand-crafted, and Diefenbach adds, “Artisinally crafted.” Engineer Beau Blyth continues the joke by saying, “It’s your grandma’s video game, passed down generation to generation,” before Preston finally says, “Please don’t put that down.”

Hyper Light Drifter’s action keeps up with the difficulty of other challenging pixelated indie games like Nuclear Throne, but you keep your progress and aren’t violently punished for failing encounters. “From the beginning, we’ve targeted for a hard game. We want to make a game for people who are good at games” Blyth says. The team’s aim is to create something that exists somewhere between Dark Souls and Zelda, in terms of difficulty, and stresses the elasticity of difficulty. Heart Machine want players to get good, but wants players to be able to make some progress movement, even if they’re struggling. “There is something to a challenging game that is satisfying, like when you finally beat that difficult boss,” Preston says.

Hyper Light Drifter is coming to PC this year with plans for console releases shortly after. For more on Hyper Light Drifter, check out the Lego Star Wars: The Force Awakens issue for a four-page preview of the game. 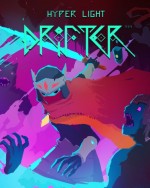