Three years after Crytek originally debuted The Hunt: Horrors of the Gilded Age, the project has re-emerged looking quite different. Now titled Hunt: Showdown, the game retains the gothic-horror-shooter motif, but through many iterations, the game has found a unique niche in the "winner take all" competitive survival genre currently dominated by games like PlayerUnknown's Battlegrounds and H1Z1: King of the Kill.

Rather than mimic the popular battle royale formula beat for beat, Hunt remixes concepts like Evolve's monster hunting, The Dark Zone's unsteady alliances in The Division, and the horror setting to create a game unlike any we've seen before. Here are five reasons why fans of the survival genre should pay attention to the Crysis creator's new shooter:

Rounds Begin By Tracking Monsters
Hunt begins with a central goal shared by all 10 players in the map – hunt down one or many A.I. controlled monsters across its sandbox map. To do so, you need to use detective vision to track down clues that may reveal the location of the monster. By touching one of the dark-energy pools you find, you get a brief glimpse of the monster's whereabouts via a momentary vision. If you still haven't pieced together its location by the third clue, the monster's location is marked on your map. Since everyone is searching for the same targets and stumbling across the same set of clues, you occasionally run into other players while tracking. This creates uneasy moments similar to The Division's Dark Zone, where you're not sure if you should trust the other team. Do you keep to yourself and slide by undetected or take them out before they have a chance to train their sights on you?.

You need to use caution when engaging other players or the legions of A.I. monsters littering the map because sound carries far. The second you fire your weapon, other players will have a rough idea of your location, so sometimes it's smarter to use stealth kills.

Players Team Off In Pairs
Rather than leave you to your own devices during the monster hunting, Hunt pairs you off into five teams of two. This creates an interesting new dynamic, as you can coordinate flanking moves, create diversions, and better defend entrenched positions should all hell break lose. If one of you goes down in combat, you have a window to revive them as well. This is especially important because the rounds are permadeath. Once you lose your hunter, you lose all their weapons, gear, and skills. Escaping with your partner also imparts a valuable team bonus. Crytek says you could try to play solo as well, but it's much tougher.

Once The Monster Is Vanquished, The Round Becomes PvP
After locating the target, the team we watched in our demo made its way to a barn where the monster was holed up. The gigantic tarantula scurries quickly, darting through windows and climbing along walls to avoid gunfire. After the frantic battle, the players made the killing blow. But vanquishing the monster isn't the end game of Hunt: Showdown, it's just the appetizer.

After killing the monster, players must banish its evil spirit. Once this timed process starts, a beacon goes out that broadcasts your location to every player on the map. The incentive for other players to hunt you down? They can grab the bounty from you and claim the reward. Some may choose to engage head on, but others may just booby trap the doors to take you out if you try to flee. After the banishment concludes, then it's time to head toward one of the exit points on the map. This chaotic skirmish is ripe for stream broadcasts, as the high tension is palpable whether you are playing or viewing.

The Atmosphere Drips With Tension
Using the excellent CryEngine, Hunt: Showdown is gorgeous, leveraging its high-resolution textures and lighting system to create creepy swamps, forests, and villages in the one-kilometer map. Set in the darkness, it's hard to know whether that movement up ahead is simply the wind blowing foliage, an A.I. zombie, or a team of players tracking the enemy. Because sound carries far in this world, players are encouraged to stay in the shadows. For instance, if you accidentally brush by a chicken coop, their clucking may alert enemies and other players to your position.

Hunt Is Permadeath, But You Don't Lose Everything
Knowing you're going to lose your beloved character, weapons, and skills during a survival game amps up the tension, but that doesn't mean it's not frustrating to start from scratch every round. Hunt: Showdown introduces a "bloodline" concept to alleviate some of this irritation. Any passive skill that you have unlocked with a hunter (like speed shooting, being able to carry more supplies, and dual wielding) can be passed down to your new hunter as a purchasable skill using the in-game currency. You can also keep a stable of hunters with different skill loadouts.

Hunt: Showdown has no planned release date yet, but Crytek plans to involve the community in fine-tuning the game. Whether that means early access, closed alpha, or pubic beta is yet to be known, but expect to hear more in the coming months. 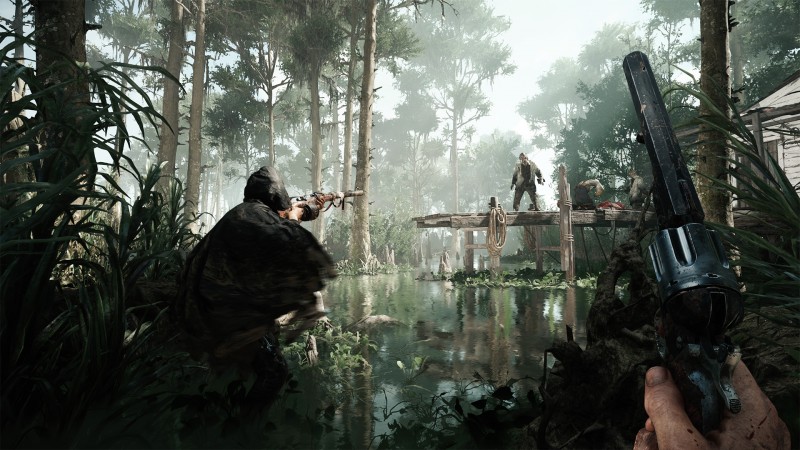 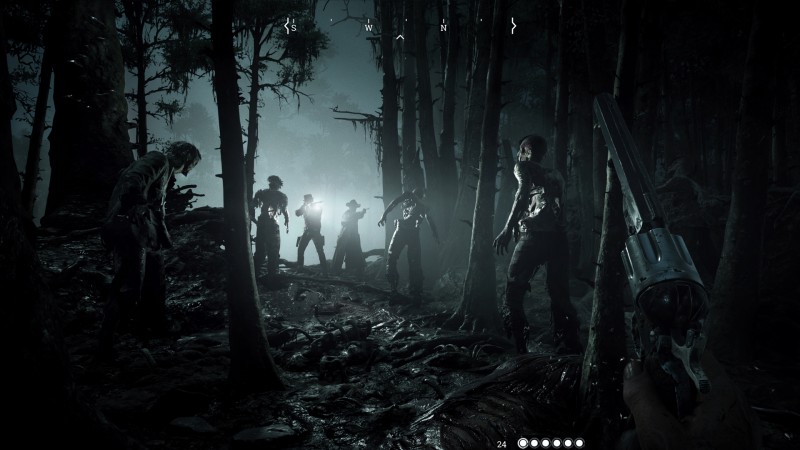 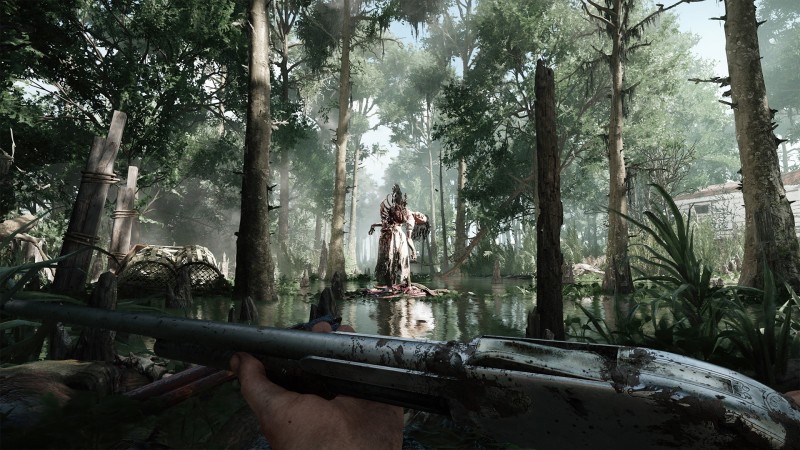 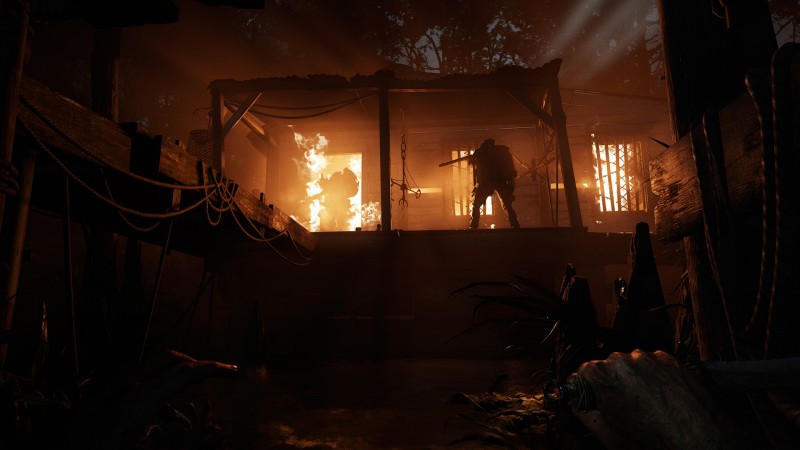 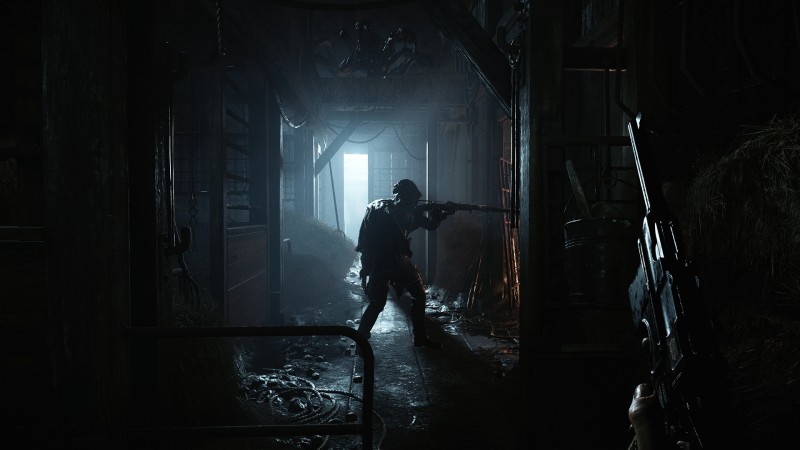