Natsume is looking at the future, and while the company is banking on its flagship Harvest Moon series, it's also looking to a new top dog. Enter Hometown Story, a project from Harvest Moon mastermind Yasuhiro Wada. Natsume is hoping Hometown Story is the start of something special: a franchise for the company's future. We had some hands-on time with the title and spoke to Wada about what to expect out of his newest creation.

After 16 years with Harvest Moon, Wada is ready to try something new. When I asked if he felt pressure to measure up, he smirked and replied, "No." Wada expressed that after years of focusing on management as Harvest Moon's popularity grew, he wanted to take a step away and make a new game.

Just like Harvest Moon, Hometown Story is based on Wada's own life and his own hometown. Wada went off to find success in Tokyo, but returned to his hometown to explore his childhood. How things had changed, right down to the shops, motivated him to a game based around that concept. In fact, he said Hometown Story's theme can be summed in one word: changes. So it's no surprise in Hometown Story that you're going back to your roots after inheriting a shop from your late grandmother.

You choose between a male or female avatar along with customization options. The atmosphere may mimic Harvest Moon as a warm world where you interact with people, but Hometown Story is focusing on two major elements: maintaining and expanding a shop and getting to know the town members. The strategy of keeping up a shop and setting prices is one thing, but Wada also wants players to focus on the people. Therefore, you must befriend the locals and take into consideration what they want in the shop for success. Putting the thought and time in will give you insight into 30 unique stories as the town grows to over 100 members. Befriending villagers comes with perks like them giving you items, but pleasing them isn't easy; you might have to trek out to the mountains and find a vendor to help fulfill item requests. Additionally, romancing a villager is an option, and Wada was happy he got to focus on just crafting a few romance options so he could put a lot of thought into them and make them all standout.

Wada crafted the characters and story scenarios for a year. In the end, you grant a wish of one of the 30 locals, although Wada wouldn't reveal exactly what the wishes entail for spoiler reasons. However, he did say he deliberately made it so people had to make decisions between what's best for the people versus what's best to make yourself happy. Wada wanted players to really put a lot of thought into which character was worth letting have their wish. Making it a memorable choice was important to Wada, as he hopes players will remember Hometown Story years down the road as a nostalgic experience.

Characters have unique personalities, and Wada says one of his favorites is the lumberjack who gets asked by nature to consider what he's doing. The lumberjack gets depressed thinking he's cut down all these trees for nothing, but then realizes that he needs to because there's a demand for them. The moment is all about just thinking about what you're doing, and not just running on autopilot. Many more like this one are throughout Hometown Story, and Wada says the outcomes of stories can go from comical to serious. It just depends where your journey takes you. As I talk to Wada, it's refreshing to see how confident he is in Hometown Story, and the smiles on his face as I ask him questions assures me that he made the game he wanted.

In my brief hands-on time, I notice that it plays very similar to Harvest Moon, and it does indeed resemble its vibrant and warm world. Walking around town, I spot vendors who try to sell me items, and if I bring them the right ingredients, they can even make items for me. Villagers react to the time and what's going on around them and their responses reflect what's going on in the town. The Harvest Moon feel is evident, and that's not a bad thing; enough is different here to make it stand out. Fans of Harvest Moon and simulation games in general just might find another addiction on their hands.

Hometown Story is on track for a fall release. Right now Natsume is targeting September. 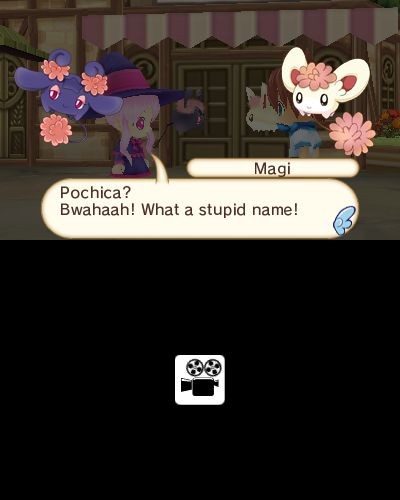 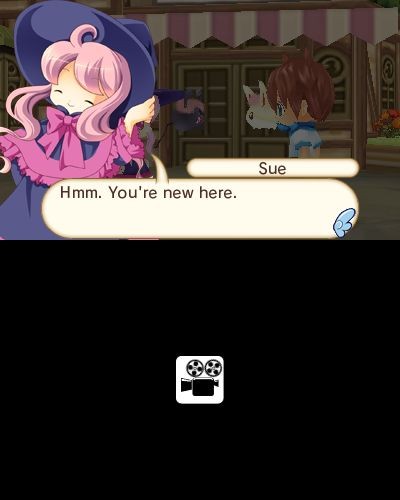 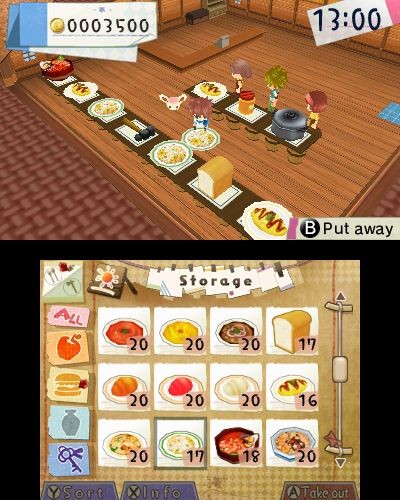 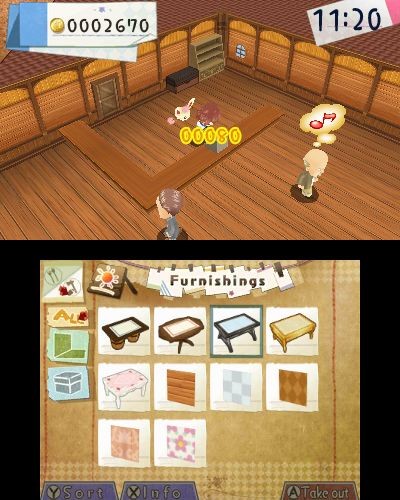 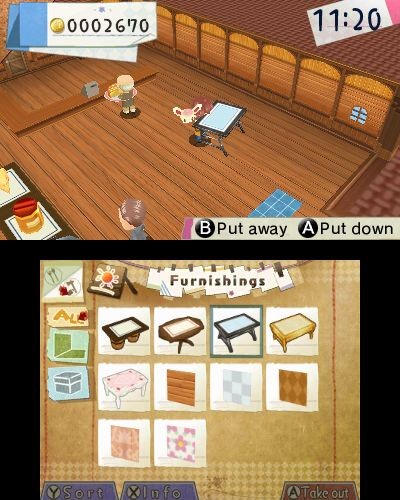