Deep Silver Sends Us Back To War When Homefront: The Revolution Launches May 17
by Mike Futter on Jan 12, 2016 at 01:00 AM
Publisher: Deep Silver
Developer: Dambuster Studios
Release: May 17, 2016
Rating: Mature
Platform: PlayStation 4, Xbox One, PC 2015 wasn't Deep Silver's best year. The company was forced to delay Dead Island 2 after a falling out with developer Yager. It also didn't make its original 2015 release for Homefront: The Revolution after its publishing deal with Crytek underwent massive change.

In the wake of Crytek's financial problems and subsequent transfer of the Homefront license to Deep Silver, the publisher needed to form an entirely new studio. Dambuster is finally putting the finishing touches on its first title.

Deep Silver has confirmed a previously rumored release date of May 17. Dambuster will be running a closed beta next month on Xbox One. Sign-ups are open now on the official website.

Homefront: The Revolution takes place in Philadelphia under North Korean rule. The game is positioned as an open-world first-person shooter, and supports both solo and cooperative play.

For more, check out our first hands-on demo from Gamescom 2015. 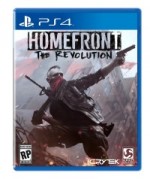