We Had A Hellraid Of A Time With Techland's First Person RPG
by Ben Reeves on Aug 14, 2014 at 03:47 AM
Publisher: Techland
Developer: Techland
Release: 2013
Rating: Rating Pending
Platform: PlayStation 4, Xbox One, PlayStation 3, Xbox 360, PC 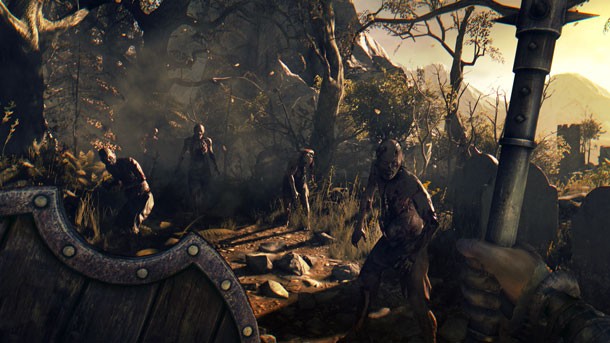 If you’re a big fan of Skyrim’s fantasy setting and first-person combat, then Techland has a game for you. It’s called Hellraid, and coincidentally enough, you’re reading a preview about that game right now.

Hellraid will have players jumping into the boots of a medieval warrior who is the last living member of a cursed family. Your goal throughout the game will be to fight back the minions of hell who are homebent on destroying our planet – something that I’ve always wanted to do, but never really had the opportunity to accomplish myself.

Every class of weapon in Hellraid functions slightly differently. For example, during our Gamescom demo, we watched as our hero picked up a mace. These strong, blunt instruments are useful for stunning enemies and can also shatter skeletons. Our Hellraid hero also has a dash move, which is extremely useful for avoiding enemy attacks and closing the distance to ranged fighters.

After bashing our last skeleton warrior to bone dust, we’re ready to level up. Hellraid has over 100 skills for players to pick, and these range from increasing your magic defense to improving your handling of weapons to acquiring new abilities. We pick shield bash, and I don’t know who’s naming these abilities, but they’re doing a great job, because shield bash allowed our hero to take his shield and bash into enemies, thus staggering them and opening them up to our attacks.

Unlike with some other RPG, Hellraid’s hero can use any of the game’s weapons from the very beginning, so you won’t have to work to improve your skills before unlocking the best weapons. We find a magical staff and decide to put it to use. The wand has two different types of attacks; one is an ice beam that can freeze enemies, and the other is a blast of homing ice shards. We prefer to freeze enemies, because then you can walk up to your foes and kick and shatter them. On the topic of kicking; we kicked a dude off a bridge (in the game not real life), and that felt really cool.

While approaching a nearby town, we run across a couple of new enemies. One is a zombie that reaches into his guts a hurls festering balls of pus at us. Another group of enemies are called exploders. I don’t know who named the enemies, but it’s probably the same guy who named the skills, because exploders will blow up after you attack them. This explosion damage will seep through your armor, so it’s best to dash out of the way before they pop. Alternatively you can kick them into a group of other foes and laugh manically as the exploders do the dirty work for you. (The Techland developer said the laughing wasn’t necessary, but I kept doing it because it was fun.)

If any of this sounds fun to you, you’re in luck; this isn’t just a tech demo, Techland is actually planning to release Hellraid for sale. If you’re a fan of games like Skyrim, or games with Raid in the title you might want to check this out when it releases for PS4, Xbox One, or PC sometime next year.

Until then, check out our impression of the game from E3.