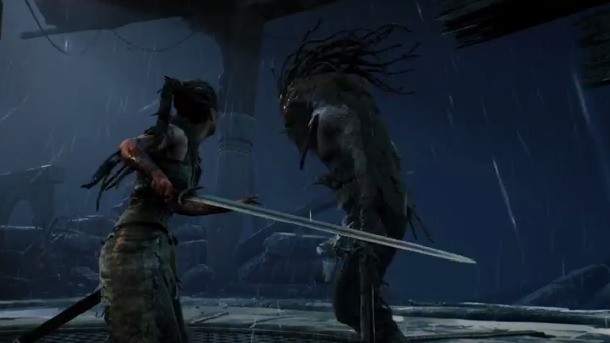 The recently re-titled Hellblade: Senua's Sacrifice will attract fans of the Dark Souls series with its unique combat mechanics. The game hits PlayStation 4 and PC later this year.

From developer Ninja Theory, this action game puts players in control of Senua, a Celtic warrior who suffers greatly at the ends of a Viking invasion. The game tackles themes of mental illness and nightmares as the protagonist travels through hellish landscapes to find her sanity again. The latest developer diary highlights Hellblade's gameplay as well as how players' and enemies' health will be displayed. Check it out below.

The developers reveal quite a bit in this lengthy clip, including a lot about how the action will work. It was important for Senua to feel vulnerable and not like a superhero when facing down demons and warriors. There will be no on-screen display, and instead damage will be represented by cuts and wounds on the in-game characters. As Senua nears death, the screen will become saturated and splashed with blood.

From the motion capture work to the detailed models, it is clear that a lot of thought has been put into making this game feel realistic. The combat animations and encounters fit with the world that Ninja Theory has labored to create, and we can't wait to see more of Hellblade later this year.