Hearthstone's upcoming Whispers of the Old Gods expansion promises to shake things up when it drops in late April/early May, and today we have a few amazing cards to share with you, one of which is the biggest minion in Hearthstone history – a massive 30/30 monster that can kill an unarmored full-health hero in a single blow. Of course, getting this titan on the tavern table will be no easy task, but you never know what can happen as players find new ways to clone and tinker with the dangerous Blood of the Ancient One.

Hearthstone lead designer Ben Brode offered us some insight on Blood of the Ancient One and The Ancient One, but first let's take a look at the cards themselves. While the conditions to get The Ancient One on board may be daunting, that is an unbelievable amount of power - almost a caricature of Hearthstone brute strength, and a dangerous win condition. Ben Brode answered a few questions for us about these upcoming cards.

GI: Can you provide insight into how these two cards were designed?

BB: Blood of the Ancient One – We wanted to give players who like crazy deckbuilding challenges a chance to see if they could get off a truly crazy combo.  It's not easy to sneak two 9-cost minions into play at once, but it seemed like a fun opportunity for creative deckbuilders to explore.  We also knew we wanted massive horrible monsters in Whispers of the Old Gods, and trying to find a way to include a 30/30 minion was a fun challenge for us.  If you can get it to go off, you have a good shot at ending the game.

What do you feel the competitive prospects are (if any) for these cards?

Blood of the Ancient One is more of a fun deckbuilding challenge with a great story moment than a card that we think will dominate high-level tournaments, but we've had a lot of fun playing the card internally.  I'm excited to see what strategies players will discover for summoning the Ancient One!

How do these two cards fit in with the flavor of the set?

The Old Gods, even while chained beneath the crust of Azeroth, led massive armies and empowered fearsome generals.  The Ancient One was vanquished long ago, but it's hard to keep the minions of the Old Gods down, and with enough of its blood, you can herald the return of the Old Gods' greatest creation!

How do you feel about creating what is essentially Hearthstone’s biggest minion to date?

Pretty good and pretty scared.  The Ancient One will take a decent amount of planning and setup to pull off, but when it happens, it’s going to be pretty scary. 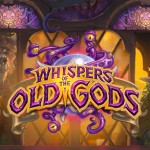