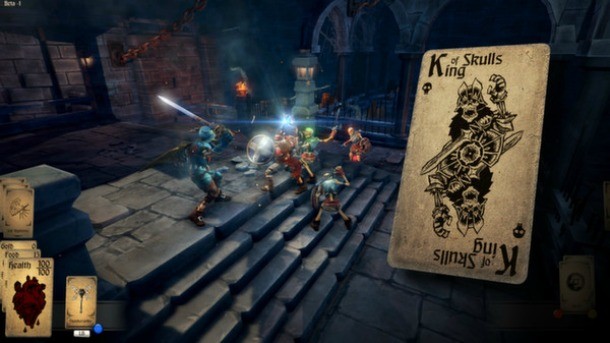 Earlier this year at PAX East, I had the chance to play an early build of Defiant Development's Hand of Fate. The title blends light deck building with dungeoneering, as you take on randomly selected monsters in active combat.

Hand of Fate is a roguelite, that pits players against an ever more aggressive dealer. As you progress from location to location (represented by face-down cards laid out like a map), you'll encounter merchants, event locations, and combat with ratmen, bandits, skeletons, and sinister mages.

The action is fluid, with dodge-rolling and blocking keys to survival. You'll often find yourself swarmed by enemies, especially if the cards aren't in your favor.

Thankfully, victory means better weapons and armor, trinkets that can unlock powerful charge attacks, and rings that enhance your fighting capabilities. The random loot and encounters could leave you underpowered against increasingly challenging foes, but since the combat is entirely active, you still have a chance to survive even absurdly challenging odds.

There are both campaign and endless modes, the latter of which was the focus of my demo. The cards are laid out in different configurations on each "floor," and often you'll have different paths to take before you find the stairs.

I had a run of good luck, encountering treasure goblins (think Golden Axe or Diablo that allowed me to build up quite the bank account. A fortunate encounter with a merchant gave me the opportunity to stock up on rings and other items that enhanced my combat ability.

I was also fortunate in many of my random events. When these happen, you'll have to choose one of four shuffled cards. These include success, major success, failure, and major failure assembled in different quantities for each encounter. Results could be new items or serious wounds.

While exploring the dungeon, you'll also need to be mindful of your food stores. Each turn will consume one food, restoring some hit points. Run out, and you'll start to starve. Unless you find a vendor quickly, the game could end.

The pattern becomes familiar quickly, but the game can get away from you with a few bad draws of the cards and some sloppy fighting. Still, I found myself engaged throughout my time with Hand of Fate.

The game has come so far since I last played it. At PAX East earlier this year, Hand of Fate was an intriguing concept. Now, it's a game, and one I'm eager to return to. The title is available now on Steam via Early Access. The title is also coming to PlayStation 4 and Vita. 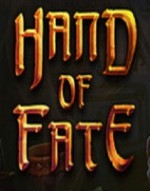