The group discussed what's in store for the sequel, including new characters and how it will follow the ending of the original game. In Halo Wars 2, the crew aboard the UNSC Spirit of Fire awake from cryogenic sleep 28 years later. After drifting in space for so many years, they find themselves above a Forerunner installation known as the Ark. Here, they discover a distress signal, which leads them to meet the new AI character Isabel (played by Erika Soto).

In 343 Industries' new development video, Ayoub describes her as "a very different kind of AI" in comparison to past AI from the Halo series, such as Cortana and Serina.

"She shows up in a way we haven’t seen AIs behave in Halo before," says Grace. "She’s freaked out. She’s seen all of her friends die and her outpost destroyed." She soon becomes tasked with helping Captain Cutter face The Banished, the splinter faction of the former Covenant.

The above video also reveals Atriox, a new villain coming to the series. 343 Industries describes him as much more than your average brute, who excels in close combat and is able to outsmart opponents. Captain Cutter will have to face this enemy, which may prove to be a difficult battle.

Furthermore, a cinematic trailer was unveiled, which you can check out below.

Halo Wars 2 will be out February 21 of next year on Xbox One and PC. You can watch our Test Chamber of Halo Wars 2's open beta here, as well as read more about what's in store for this sequel by reading 343 Industries' blog post on Xbox Wire. 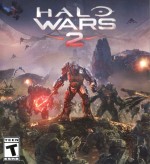