Developer Klei Entertainment has always had a knack for style, with games like Don't Starve and Invisible, Inc. At last year's E3, Klei showed off its newest project, Griftlands, that once again has a unique look and premise.

Griftlands is a sci-fi RPG that its developers describe as a "pirate/mercenary sandbox," where you attempt to make a fortune for yourself. You control a group of mercenaries who have several different quest lines, and Klei explains that the world will mold and dynamically change depending on your actions. As for battles, these are played out in a turn-based fashion with a focus on subduing your enemies rather than outright killing them.

Much of Griftlands revolves around its economy, and on its Steam page, it says that "everything is negotiable," including money, loyalty, and morality. Below, you can watch its reveal trailer, which premiered at last year's E3 at the PC Gaming Show.

Griftlands releases for PC at some point this year. No fixed release date has been revealed just yet. 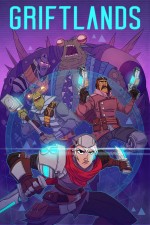