For Grid Autosport, developer Codemasters is hoping to return the series to its roots.

At a recent Bandai Namco event, senior executive producer Clive Moody and senior designer Andy Stewart were on hand to showcase the upcoming Grid Autosport, and share what’s changing for the series.

Moody and Stewart, like many developers, are paying close attention to fan feedback. For Autosport, the team has decided to remove frivolous elements that have padded previous entries in the series, and focus simply realistic racing. Things like point-to-point racing and unnecessary management-sim aspects have been removed, for example, as they don’t represent an authentic racing experience, Moody and Stewart said.

In the past, the developer has worked with professional racers to influence their design decisions, but for Autosport, the team has expanded its pool of resources to team managers, engineers, and even journalists who cover racing in order to get feedback from all sectors of racing.

The game will offer five distinct racing classes. The Touring Car mode will appeal to aggressive racers. Endurance offers night races for those who want to drive for extended periods of time. Open Wheel races will allow for highly modified cars. Street Racing offers iconic locations to race in, as well as more right angle corner turns for added challenge. Finally, open world racing will allow racers to fight for first on a large, open track.

Standard Grid features, like the ability to rewind a mistake persist, but you will also find new additions like cockpit cams, and the ability to request information from pit crews on demand.

Another big update for Grid Autosport is the expansion of its online browser component, Racenet. The new Racenet allows for Club creation (basically clans) that can have up to 100 members. Each club will collect experience as a large pooled group and then you can compete with other clubs.

In terms of multiplayer, you will still find split-screen as well as online modes. Grid Autosport’s focus for online is long-term progression, with each discipline offering 99 levels. The car you use online will also deteriorate over time, like a real car. You can choose to keep racing with the car you have been racing with and heavily customized, but it will be more susceptible to expensive repairs if you make mistakes. Time trial leaderboards also remain. 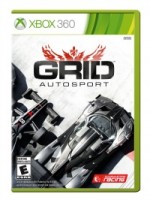