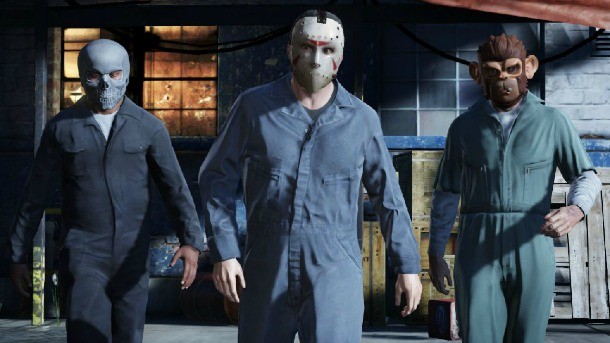 You can make decent money knocking over liquor stores, arms trafficking, or carrying out hits in Los Santos, but why be a small-time crook when you can go for the major score? Grand Theft Auto V protagonist Michael thought he made enough to retire from a life of crime, but after his family squanders away most of his ill-gained earnings, he's forced to jump back into the game with fellow playable characters Trevor and Franklin. The only way he's going to regain his financial footing is by thinking big.

An aficionado of Vinewood action films, Michael also loves the thrill of the heist. GTA V peppers five or six of these big jobs throughout the story, each requiring careful preparation and execution. If you successfully pull off these jobs, you can walk away with millions of dollars to spend on luxury vehicles, helipads, marinas, businesses, weapons, aesthetic and performance car customizations, or even properties (a reversal of position for Rockstar, who previously told us you wouldn't be able to buy homes).

These major heists typically begin with a meeting of the minds. As Michael, Trevor, and Franklin kick around ideas, the player is presented with options on how to approach the proposed mission. For instance, you could enter a building stealthily from the roof or bust through the front door, guns blazing. The choice you make completely changes the dynamic of the heist, and thanks to the ability to replay missions you can experience both approaches if you want.

The more complex missions require the help of specialists like a wheelman, hired gun, or a hacker. You have cheap and expensive options, but you get what you pay for. The cheaper hacker may take longer to crack the security network, leaving you with only 30 seconds to collect all the money you can carry instead of the full minute you may have received had you spent more to get a seasoned pro. The drawback to hiring an expert is they demand a bigger cut of the take. If your hired hands survive the mission, they will improve and perform better the next time you need their expertise.

Once you lock down your approach and hire any specialists you require, you must perform a series of sub-missions. In the mission Rockstar showed us (which isn't a major story heist, but a one-of-a-kind mission that shares structural similarities), the crew plans to rob an armored security truck just like the famous scene in Heat. Before they can start the mission, the player must steal the vehicles being used for the job, find a place to stash the getaway vehicle, and buy some boiler suits and masks to wear during the heist.

With these sub-missions already taken care of before the demo starts, we join Franklin just as he's pulling up to meet Michael and Trevor. After the three exchange pleasantries, Michael outlines the plan. Trevor needs to find an elevated perch and serve as the lookout, notifying the other two when the security truck is nearing the site of the attempted robbery so they can block the road.

The job starts with the player controlling Trevor in a first-person view as he looks at the oncoming traffic through a pair of binoculars to locate the armored truck. Once he spots it, the camera zooms out and places the player in control of Michael in the garbage truck, who maneuvers the vehicle to block the entire street.

When the garbage truck is in place, a cinematic sequence shows the armored truck approaching the roadblock and screeching to a halt. Now the camera jumps to Franklin's first-person perspective behind the wheel of the tow truck. The play tester steps on the gas and rams into the target vehicle at full speed. Another cutscene shows the powerful impact of the crash, which tips the armored vehicle on its side.

The player stays in control of Franklin, who walks over and places explosives on the back door of the overturned truck. After detonation, Michael joins Franklin and the guards emerge with their hands up. The alarm is already sounding, and police sirens scream in the distance. The team doesn't have time to collect all the cash, so they take defensive positions and wait to open fire on the LSPD.

At this point in the mission the player is given the ability to swap between Trevor, who is perched in an elevated position with a sniper rifle and an RPG, and the two other characters, who are both armed with machine guns near the truck. When the characters are this close together, player-activated switching happens nearly instantaneously, with the world slowing down for a split second so the player can reorient before rejoining the fray. To showcase the speed of these transitions, the play tester fires a rocket with Trevor and switches immediately to Franklin. Before the rocket even reaches its intended destination, he's in full control of the new character.

After disposing of several waves of cops, a brief reprieve allows the crew to gather the money and make off in the getaway vehicle, marking the end of a thrilling score.

Jumping from one character to another repeatedly may sound disorienting on paper, but watching Grand Theft Auto V in action quells any worry I had about the system. Smooth transitions make it easy to orient yourself after a switch, the cinematic sequences add another layer of drama to the proceedings, and being able to rotate between the characters gives the players a new level of control in dictating their play style. For Rockstar, this may be the greatest heist of all.

To read more about GTA V, watch the character trailers released just last week, read our new feature on the open world, or check out our coverage hub.