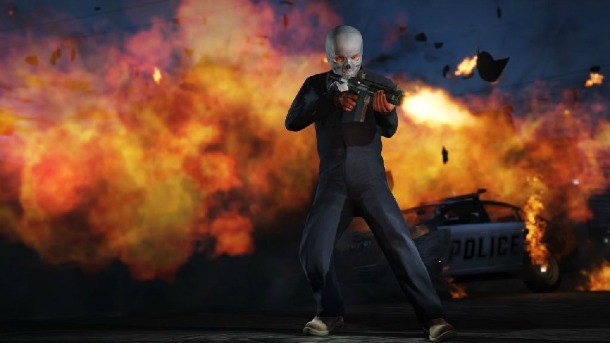 The core combat of Rockstar games has evolved quite a bit since Grand Theft Auto IV released in 2008. Red Dead Redemption streamlined the cover system first implemented in GTA IV, made gunfights more visceral thanks to the animations provided by the Euphoria technology, and introduced the slow-motion Dead-Eye mechanic. Max Payne 3 took the combat even further with destructible environments, kill cams, a last stand mechanic, and more natural feeling movement when you're running and gunning. For Grand Theft Auto V, Rockstar is taking the lessons learned from all of its previous games to bring the combat into the future.

The first thing I notice when Franklin and Michael open fire during a heist gone wrong is the smoothness of the transition animations. The characters move effortlessly in and out of cover, while taking care to avoid exposing themselves to incoming fire. A library of new animations also introduces a combat-ready jog that makes it easier to shoot from the hip and even allows players to run, aim, and shoot at the same time. Players can also drop into a combat roll at the press of a button.

The gunplay still takes place in third person, but Rockstar migrated part of the Max Payne 3 team over to the GTA team to tweak the camera perspective. The new over-the-shoulder aim view gives you a clearer field of vision during combat, which makes it easier to spot enemies at the periphery and while you're behind cover.

Not every gamer prefers the same aiming system, so Rockstar has included three different options in GTA V: a hard snap-to targeting, a soft targeting, and free aim. The impressive death animations created by Euphoria normally make it easy to tell when a body is about to hit the floor, but the tweaked reticle confirms your kill by turning into an X. When you hover the reticle over an enemy, it also turns red to indicate the threat.

When you pull the trigger, expect to have a more visceral connection to the outcome. Some types of cover are destructible, so you can chip away at hiding spots to expose enemies. Rockstar says the gunshot damage is now totally dynamic and specific to particular weapons as well.

When you're on the receiving end of a hail of bullets, you'll also notice a slightly modified health system. You can regenerate up to 50 percent of your health, but you need med packs to make up the difference. Rockstar is also implementing various kinds of body armor that offer different levels of protection.

Melding these improvements together, Rockstar aims to offer the best gunplay the series has ever seen. We won't know for sure if it succeeded until we get our hands on the game for ourselves, but given its track record of improvements with Red Dead Redemption and Max Payne 3, we're bullish on its prospects.

To learn more about GTA V, watch the character trailers, read our new features on the open world, heists, and customization, and check out our coverage hub.