The latest trailer for sim-racer Gran Turismo 6 is out, and among the many Earth-bound vehicles is a glimpse of a lunar rover. Has developer Polyphony Digital jumped the shark?

We don't know if the studio is just joking around or what, but regardless, the trailer also features some of the game's 1,200 plus cars (including 120 new ones for GT 6) and real-life locations and tracks.

One of the upcoming features for the title is something called GPS Logger. This uses the GPS functionality of your phone or tablet in conjunction with GT 6's course maker to recreate your daily travel routines in the game.

By the sound of it, this feature will be offered as a future update to the December 6 game. 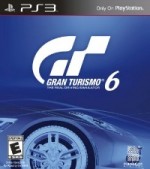