In anticipation of Gran Turismo 5's Wednesday release, here's a rundown of some the game's many features. We got our hands on the game and wanted to give you a lay of the land. Be sure to stick around for more on Gran Turismo 5 leading up to its launch on Wednesday.

(Note: We didn't get a chance to play the game's online portion, but it'll feature 16-player races, a personal message board, the ability to send cars/parts to friends, and more)

GT MODE
This is where you'll spend most of your time taking license tests, racing (in both A-Spec and B-Spec mode), upgrading your cars, buying cars, etc.

A-SPEC
This is more or less your career. As in past GTs, you'll race through different events and championships that each have their own requirements. Some are for cars of a certain year, make, or origin, and others are for only front-wheel drive cars, etc. You get money and XP for each race, and this XP goes towards your A-Spec Level. All of A-Spec's races are housed in the Beginner, Amateur, Professional, Expert, and Extreme series, and each series and race in the game requires a minimum A-Spec level.

B-SPEC
Here you create and train an AI racers to drive through the same events and championships on your behalf. During a race you can command your driver on the fly, telling them to slow down, maintain their pace, speed up, or overtake at any given time (assuming the cooldown timer has expired). Appropriately, you earn B-Spec XP and a B-Spec Level which determines which races you are eligible to race in.

CARS
Used and new dealerships let you browse cars from across the globe and through time. The game features over a 1,000 cars, and the two dealerships have different inventory. In fact, the used car lot populates with an assortment of vehicles as you play, so you won't always see the same selection.

You can fine tune your purchases in the GT Auto section and the Tuning Shop. The latter is where you'll buy new exhausts and weight reduction kits, while the former offers a mix of services. You can get your car painted, change the oil, and perform engine overhauls for used cars and repair damaged chassis. You can only paint your cars with paint chips you already own, so GT 5 isn't about tricking out your car in a rainbow of colors or decals. Paint chip colors can be earned or you can choose from the colors of the cars you already own. However, you can only use each paint chip once, so it's not like you can paint your entire fleet of cars the same color all at once.

All cars are split classified as either Standard or Premier, and the latter are more detailed, offer a cockpit view, and show more damage than the standard cars.

SPECIAL EVENTS
This category of your My Life career hub is where you'll find separate sections for things like NASCAR, rally, and Kart tutorials. These disciplines offer challenges of varying difficulty, which you'll unlock as you make your way up the career ladder.

Gran Turismo Karting Experience
There aren't a lot of races in this Special Event and its three difficulty levels, but you'll run through some kart-specific race tracks like Eifel and Tokyo Bay. Even though karts are sequestered in this Special Event area, you can still race them in Arcade mode on whatever location you want. To do this, however, you have to make sure you go into your garage and label your kart as a favorite before you go into Arcade mode.

Jeff Gordon NASCAR School
Starting with a short intro to the sport with a virtual Jeff Gordon (voiced by the real deal), this event is more like a license test in stock cars. Hit the ovals and get a feel for how oval racing and stock cars handle differently than your normal vehicle. NASCAR racing in the game doesn't feature a full 43-car field, and there are only cars for Jeff Gordon, Jimmie Johnson, Jaun Pablo Montoya, Carl Edwards, Brian Vickers, Dale Earnhardt Jr. Kyle Busch, AJ Allmendinger, Joey Logano, and Tony Stewart.

Top Gear Test Track
The hit show's flat test track which turns in on itself like a figure-eight can be a formidable challenge. Take to this airfield in everything from an old VW bus to a Lotus Elise.

AMG Driving Academy
Here you'll learn the ins and outs of how to tame the monster that is the Nurburgring. The cool thing about this Special Event is that it breaks the 'Ring up into sections before making you tackle the whole gargantuan track all at once.

Gran Turismo Rally
Rally racing is a different kind of beast, and you'll get your feet wet with different races surfaces and the tires that go along with them as you combine your times in different stages.

Grand Tour
This is a five-race tour from the Alps of Switzerland to Rome that encompasses taking on the Monza track with a Ferrari, a Lamborghini-driven night race through Tuscany, a rally portion, and a spin through the streets of Rome in a different Lamborghini. Here's a picture I took using the camera options and the Photo Travel feature. It was easy to apply different effects such as the contrast between the car and the location itself

LICENSE TEST
These are basically the same format you've experienced in other Gran Turismo games where you are tasked with performing certain feats in specific cars for a bronze, silver, or gold trophy. It may sound tedious to take tests, but they are an easy way to earn XP for your A-Spec Level.

PHOTO ALBUM/PHOTO TRAVEL
Gran Turismo 5 features an impressive suite of photo-taking features, including the use of real-life camera functions while you're taking those shots such as exposure and shutter speed. Photo Travel places you in locations around the world and lets you plop down your cars in select locations to take photos. Here you can walk around the car, apply camera filters, etc. to get the look you want. Any shots you take are in your Photo Album where you can send them to your PS3's cross media bar or share with friends. You can also take photos from any replay you've saved. Notice the light damage as this standard car rolls repeatedly. The car ended up surprisingly fine after this high-speed crash

ARCADE MODE
This is pretty self-explanatory, featuring single races with a variety of cars over different tracks as well as solo Time Trials. Arcade mode also houses the cool Drift Trial. Here you'll try and earn as many drift points as possible through pre-set sections on courses. You can also access split-screen multiplayer from this mode.

COURSE MAKER
A big new feature in Gran Turismo 5 is the course maker. It starts out with choosing one of seven locations: Toscana (tarmac), Eifel (circuit), Liege (gravel), Mt. Aso (tarmac), Alaska (snow), Eifel (kart), Tokyo Bay (kart). From here you can determine how many sections you want for your created course, with seven being the maximum and two the minimum. You can specifically tweak certain perimeters of each of those sections such as their overall complexity, road width, and sharpness of the turns. Changing any one of these aspects also changes the overall makeup of the map, so if you like the look of the first part of your course, don't get your heart set on it, because fiddling with the rest of the sections could change the look of whatever you've done previously even if the numeral definition of those sections is the same. You can test drive your creation at any point along the way, and can send it to friends, and play it in Arcade mode.

GRAN TURISMO TV
This feature wasn't active in the build we received, and the only clip available was the game's opening sequence. As it's planned, however, GT TV will supply video content like actual races and shows like Top Gear.

GAMEPLAY
The game not only looks as good as advertised, but each vehicle also handles really well, giving you a great flavor of all kinds of vehicles and the various challenges associated with their braking, horsepower, engine placement, etc. Snow, night, and rain weather effects throw a kink in some of your best-laid racing plans, but tackling the elements is all part of the experience.

We didn't get a chance to try the game out with a racing wheel, but using the analog sticks provides a responsive ride, and I would definitely suggest them over using the face buttons to accelerate/brake.

DAMAGE
Premium cars damage more intricately than standard cars, but in our time with the game we didn't notice an extreme amount of damage either way. Moreover, it didn't seem to affect the handling of our car or require repairs from race to race.

EARNING ITEMS
Gran Turismo 5 not only rewards you with vehicles for winning events, but as your A- or B-Spec Level goes up you'll also get other goodies along the way such as:
Level 2: The beginning rank of the Jeff Gordan NASCAR School opens
Finish a license: mm-R Cup Car '01
Level 7: Intermediate rank of the Kart Experience
Acquire 10 Cars: Get Horn No.233
Finish the Intermediate Kart Experience: Get the Red Peal Paint Chip

HARD DRIVE INSTALL
You can simultaneously install the entire game while you're playing or you can install it in one big chunk. We installed about 1.6GB after about six hours of playing through this install-as-you-go method, and then installed the rest of the 8GB file in 47 minutes in one dedicated install. 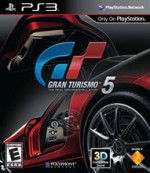