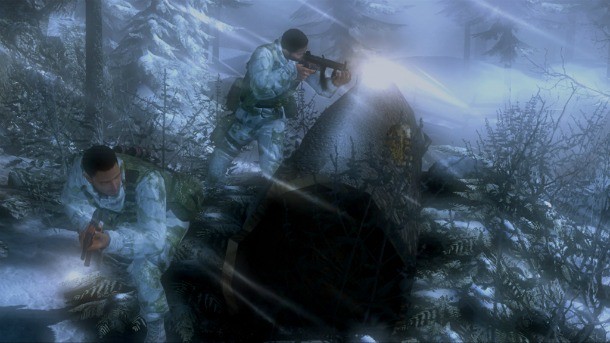 James Bond gets around, so we’re not too surprised that last year’s Wii exclusive title, GoldenEye 007, is getting two-timed with an updated HD version for PlayStation 3 and Xbox 360.

Those who played the shooter last year on Wii already know the general architecture of the game. Activision hired Bruce Feirstein, one of the original writers of the 1995 GoldenEye film to update the story, which sees Bond traveling from Russia to Nigeria as he investigates a terrorist cell that had gained control of a satellite super weapon capable of devastating entire cities from space. To help update the experience, Activision also enlisted actors Daniel Craig and Judi Dench to reprise their roles as modern day Bond and M.

Every level in the game is getting a facelift. Activision producer James Steer told us, “you’ll be revisiting the same levels, but we’ve added new hi res textures, new animations, and new audio. There is a completely new engine, so there is a new AI system.” There won’t be any new areas to explore within the environment, but Reloaded will feature more props and scripted sequences that will beef up the game’s atmosphere.

Eurocom is adding one new mode that wasn’t in the Wii version, a challenge mode called Mi6 Ops Missions. These short, replayable levels won’t be connected to the main narrative, but they will offer four different gameplay types for super spies to challenge themselves. Assault missions are action heavy sequences where players will be tasked with assaulting an enemy location. Elimination will require players to take out a set number of enemies across a map under a set time limit. Stealth mode requires players to sneak through an environment, hacking open doors and taking out enemies with hand-to-hand takedowns and silenced weapons. Finally, wave defense will require players to defend computer terminals from waves of enemies while they try to download enemy secrets. Similar to Halo’s skulls system, players will be able to tweak different options such as enemy count and weapon load out, which will add multipliers to their score that can then be posted to a leaderboard.

We played through an early mission in the game, in which we stormed a large Russian installation atop a snowcapped mountain. The game controls a lot like Activision’s Call of Duty series, and the graphics are much improved over the Wii version, but we hope the AI sees some improvement before the game’s release. GoldenEye 007: Reloaded will also support PlayStation Move, so players will still be able to play using motion controls if they desire when it releases this September.