It's Official: GoldenEye Is Getting The HD Treatment
by Jeff Cork on Jul 20, 2011 at 08:42 AM
Publisher: Activision
Developer: Eurocom
Release: November 1, 2011
Rating: Teen
Platform: PlayStation 3, Xbox 360 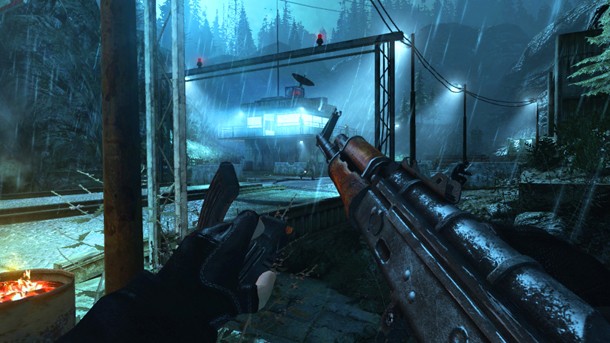 Activision was poised to reveal the HD remake of GoldenEye 007 at Comic-Con later today, but things didn't go off quite that smoothly. Blame the Internet. A wave of screens leaked online yesterday, so the surprise of the official announcement is a bit tempered. That said, Activision has announced that GoldenEye 007: Reloaded is coming to the PS3 and Xbox 360 this fall. Ta dah!

As with last year's Wii reboot, Reloaded isn't intended to be a scene-for-scene remake of the Nintendo 64 original. Instead, it uses many of the familiar locations and scenarios while adding new areas and gameplay. In addition to providing improved visuals, the game runs at 60 FPS. And since player expectations of multiplayer have evolved over the years, while the game supports four-way split screen multiplayer, would-be agents can test their skills online in 16-player battles with new maps and modes. Extra Mi6 Ops Missions provide completely new levels that take place independently from the campaign, tasking players with different assault, elimination, stealth, and defensive objectives.

“We are beyond ecstatic to debut GoldenEye 007: Reloaded to the millions of fans who have been clamoring for it to arrive on Sony and Microsoft home consoles,” said David Oxford, Executive Vice President at Activision Publishing.  “And now with full PlayStation Move functionality, 007 fans all around the world can play the game in full HD in more ways than ever before.”

"Promising to be one of the most immersive and interactive Bond games to date, this is an outstanding opportunity for PlayStation fans to experience one of the most iconic and action-packed shooters in an all new way with PlayStation Move and the Sharp Shooter peripheral,” said Rob Dyer, Senior Vice President, Sony Computer Entertainment of America.  “By bringing together GoldenEye 007: Reloaded, and PlayStation Move’s Sharp Shooter, we are continuing to expand the new world of motion-based entertainment appealing for hardcore fans and only possible on PlayStation.”

We'll have more details on the game in the coming weeks. In the meantime, check out the announce trailer.