Fans of brown and dusty wastelands have a lot to look forward to in this attempted revitalization of the Golden Axe franchise. For everyone else, the formula might wear thin after a few hours. It's not just the visuals -- Golden Axe has very few tricks up its sleeve. Kill a wave of enemies to open a gate, and run forward. For variety, you can instead gallop forward on an unwieldy beast. The increasingly frustrating fights are filled with an endless flow of disposable bad guys, ever the hallmark of a game that has too little content and needs to fill space. It's unfortunate, because I actually enjoy the core combat mechanic. Eschewing the expected hack-n'-slash mindlessness, a timing-based evasion and blocking system is required to master the melee. It's not enough to save an otherwise lackluster effort, but Secret Level was definitely on to something with the combat. 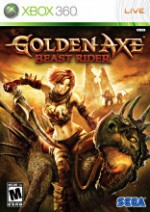